Ducati MotoGP rider Andrea Dovizioso has described this year’s post-season tests at Valencia and Jerez as the best he has experienced since joining the Italian manufacturer.

As in Valencia, the 32-year-old’s main focus at Jerez was on comparing an early version of Ducati’s GP19 to this year’s bike.

His running was disrupted by a crash on Wednesday that left him with “big pain”, but despite some concerns he could have to sit out Thursday’s running he was able to continue working as normal.

Dovizioso only reported a “very small improvement” in turning with the new machine, but was nonetheless left feeling confident for 2019.

“These have been the best winter tests since I’ve been a Ducati rider,” said Dovizioso.

“It’s hard to say if the Ducati is the most competitive bike. It’s normal for our opponents to describe our bike as the best, but until you try the other bikes you don’t know how they go.

“In the end it’s only the results of the races that count. Now we have a very good base and this year we have demonstrated that in all conditions.

“We have to approach the season in the right way and we have to work well this winter, both myself and Ducati, to arrive ready for the start of next season.

“We will surely fight for the championship from the start and we will start from a very good base.”

After ending the first day of Jerez testing second-fastest behind new teammate Danilo Petrucci, Dovizioso said he was unconcerned at dropping to eighth on the second day.

The Italian insisted that confirming the sensations he felt at Valencia was of more importance than gunning for a single fast lap.

“The laptimes at the end of the test don’t mean anything, especially when the riders are very close,” said Dovizioso. “This is not too important.

“We don’t have a lot of tyres, so you have to decide [whether] to use the tyre to make a laptime or to make a comparison of the material.

“The material we compared here, I had the same feeling of Valencia. It was the only goal we had, because we didn’t have a completely new bike.”

“We didn’t really improve the bike, we just understood something.” 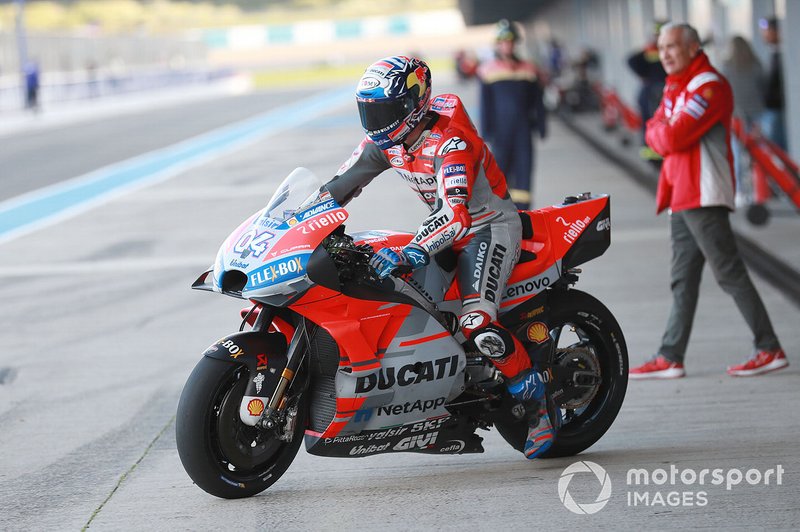