Dovizioso "pushing too much" in Barcelona crash 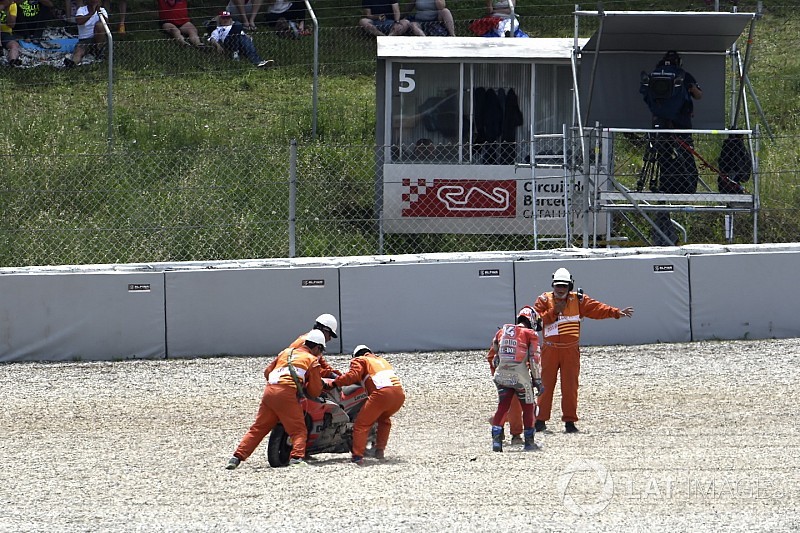 Ducati MotoGP rider Andrea Dovizioso says his Catalan Grand Prix crash was down to "pushing too much" to stay in victory contention.

Dovizioso was ran a little over a second behind the race-leading duo of teammate Jorge Lorenzo and championship leader Marc Marquez when he fell off his bike at hairpin-like Turn 5 left-hander.

The crash marked his third retirement in four races, and leaves him 49 points behind championship leader Marquez.

“I arrive five, six kilometres faster, because I was able to exit a bit better in Turn 4,” Dovizioso explained. “And I braked too much.

“A mistake because I was on the limit.”

Lorenzo would go on to secure his second straight win, drawing level with Dovizioso in the standings.

But the Italian shrugged off the suggestion that he was feeling the pressure due to the much-improved recent form of his stablemate, instead stressing that he had the championship battle in mind when he crashed.

“It's not about Jorge,” Dovizioso said. “It's about - I want to win the race because I have the good speed and we have to gain the points to Marc, and Marc was there.

“I was pushing, I didn't want to give up. My speed in the race, it wasn't good enough.

“I lose one tenth, almost two tenth in one lap. But when the grip is very low, one, two tenth can be like one second.

“So I was pushing too much. This is what happened. And we go home with zero points.”

Marquez, who dropped away from Lorenzo almost immediately after Dovizioso had crashed, said he'd had a moment on that same lap.

And having crashed last time out in Mugello, as well as in FP2 and in FP3 earlier this weekend, Marquez felt it was crucial to make sure of the points haul.

“In one moment I lose the front, in the same lap Dovi crashed,” he said. “Then I start to see many yellow flags in the circuit, many crashed.

“After Mugello, I missed some confidence. This weekend already we crashed two times, big save in the last corner [in FP4] so [it] was time to finish the race, 20 points.

“Last laps I try to keep pushing to see if Lorenzo drop with the tyres but we were dropping in the same way so then I just manage the distance with Valentino and finish the race in second place.”