Dovizioso did not ask for Ducati team orders in Sepang 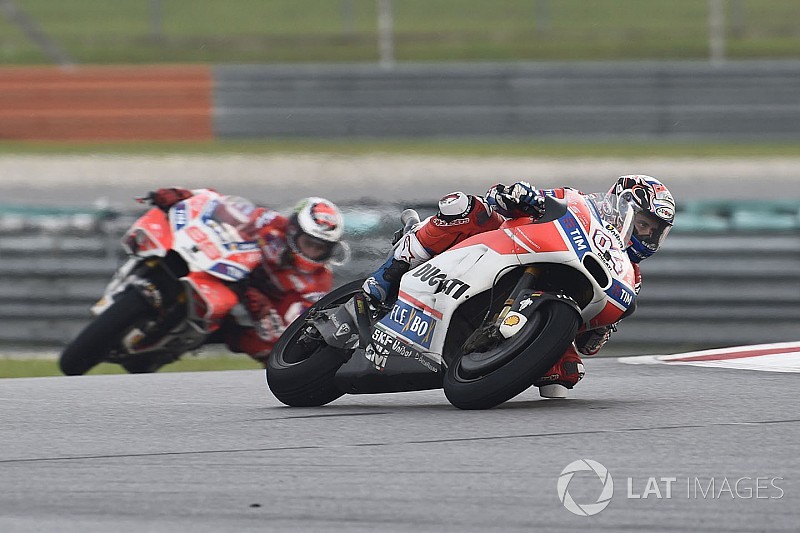 Andrea Dovizioso says he did not request that his Ducati team implement team orders during the Malaysian Grand Prix in order to keep his MotoGP title hopes alive.

A sixth victory of the year at Sepang ensures that the championship goes down to the season finale in Valencia, albeit with Dovizioso trailing Marc Marquez by 21 points with only 25 on offer.

Dovizioso had to pass teammate Jorge Lorenzo to seal the win, taking the lead with four laps to go as the Spaniard suffered a moment and ran wide at the final corner.

Lorenzo had been given a coded dashboard instruction – Suggested Mapping 8 – to let Dovizioso by, although he claimed after the race he didn't see it and was only made aware of it in parc ferme.

But Dovizioso insisted that there was no meeting before the race where team tactics were discussed, saying that he expected he would have to pass his teammate on-track to get the win.

"I do not know anything about this [dashboard message], because I'm not a political rider," said Dovizioso. "I'm not one who goes to talk with the bosses about these things.

"I'm a sportsman and victory has to be earned on track. I did not ask Ducati for anything.

"If it happened anyway I don't know, but in that case it was a Ducati decision. Maybe I am unusual or even stupid because I'm someone who doesn't look for these things.

"We didn't have any meetings [about team orders], I was just concentrated on getting 25 points in any conditions we found ourselves in."

Dovizioso added he didn't expect Lorenzo to be as strong as he was in the wet, but reckons he would have had the pace to pass his teammate even if he hadn't made his error.

"It was harder than expected [to win] because Jorge rode very well and it was very easy to lock the front," he said.

"I stayed behind to try to not take risks, because I knew I had time to do it without risking too much.

"At three-quarters distance Jorge tried to create a gap, but I knew I could be quicker than him. And in the end I think he didn't want to do anything crazy.

"He was locking the front and nearly crashed, so with the championship still open we didn't fight."