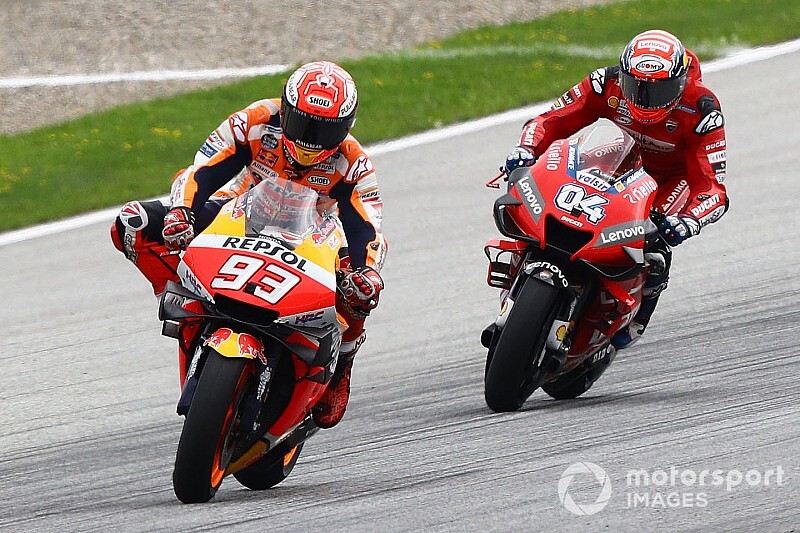 Ducati’s Andrea Dovizioso admits it is “really difficult” to know how to close the “ridiculous” gap to reigning world champion Marc Marquez.

Honda rider Marquez won a sixth premier class title in seven years with four races to spare in Thailand, and is currently 135 points clear of second-placed Dovizioso in the standings ahead of this weekend’s penultimate round in Malaysia.

Dovizioso says he knows what he’d like from the Ducati to be able to challenge Marquez, but conceded everyone is “worried” right now because they “don’t know exactly” what to do.

When asked if beating Marquez would be down to a technical improvement or a change in riding, Dovizioso replied: “Everybody in this championship is working at the maximum, doesn’t matter the result.

“We will continue like this to put in this effort. In this moment it’s really difficult to know what to do, because the gap is ridiculous.

“It’s a bit too much. Everything is possible. In the last two years we fought more, so we have the chance to come back and fight again.

“But every year like always is a different story, and I think everyone at this moment is worried because they don’t know exactly what to do.

“I know what I would like to have different, but to be able to do that, to have that form the bike, from your style, I mean everybody is working so hard.

“It’s not about that. But when there is a big effort from a lot of people, engineers, everything can come out [right].

“So, we will push and in this moment it’s a bit difficult, but it’s the same for everybody. But if you think in that way you will not race in the future.”

This weekend Marquez can set a new record for the most points scored in a single season, surpassing current teammate Jorge Lorenzo’s tally of 383 from his first title-winning campaign with Yamaha in 2010.

To do so, Marquez only needs to finish seventh or better to breach Lorenzo’s record, though he admits he will not change his approach in Malaysia to reach this and doesn’t care about it.

“I don’t change the strategy even when I was fighting for the championship,” he said. So, the strategy will be the same.

"It’s true that I can be the rider who has scored more points in 18 races, but it’s a record that we will remember if somebody comes and beats it again. So, I don’t care about about this record.”