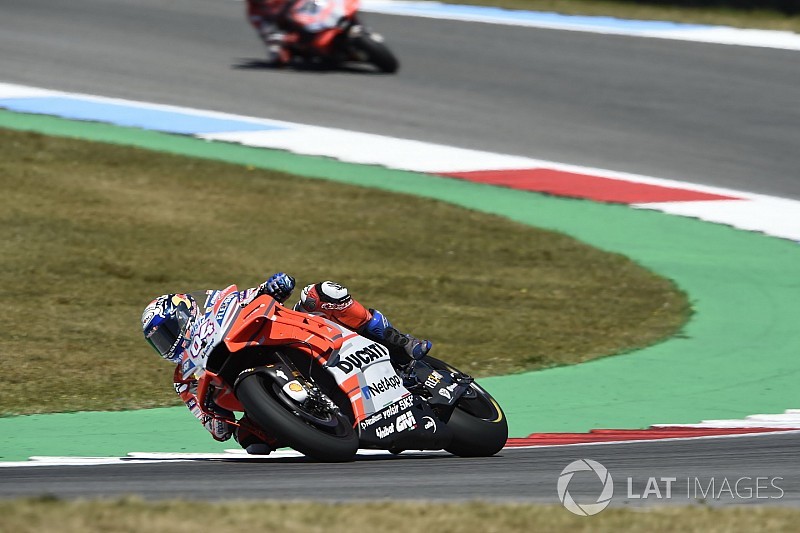 Andrea Dovizioso says Ducati's current biggest issue in MotoGP is maintaining its tyre life, as he was "completely f***ed" at the end of last weekend's Dutch TT.

Tyre preservation was among Dovizioso's strong suits last year when the Italian came close to taking the title, but it has become an issue for Ducati in 2018, according to the 32-year-old.

Dovizioso, who has yet to win a race since the season opener in Qatar, finished fourth in Assen, unable to keep up with race winner Marc Marquez in the latter stages due to rear tyre-drop off.

"We lost in the last eight laps, I didn't have any more traction," said Dovizioso. "That is the reason why I couldn't stay with Marc and I couldn't fight for the podium, that is the negative point of the weekend.

"I am happy about the fourth position because the last eight laps I was struggling a lot, I didn't have any more speed.

"I did fourth because I put myself in the right position in the right moment, not because at the end we were fast enough to make fourth.

"I am happy in the way I rode the bike in the race but we have to try to improve a little bit the way to manage the rear tyre.

"The difference from last year is when you lose the grip at the end of the race, we are completely f***ed.

"Last year we had a possibility to manage the consumption and be fast at the end of the race. This year, with this tyre, no."

No point thinking about championship

After crashing out in the previous race at Barcelona, Dovizioso moved up to fifth in the standings at Assen but lies 61 points behind leader Marquez.

He claimed that winning the title is not "impossible", but warned that Ducati first has to improve tyre management before ti can set itself such goals.

"If you look at the championship, if you look at this race, if you want to be objective, is very difficult [to beat Marquez] but is not impossible," he said.

"But in this moment I am not focused on that and I will not race to try to create some strange situation.

"I think we have to improve our negative point and at the end of the race, still we are not strong enough.

"That is the point and we have to be focused on that. When we'll be better on that, we can think about different things.

"If you are not okay in every area, you can't really fight with Marc when he has a lot of points."