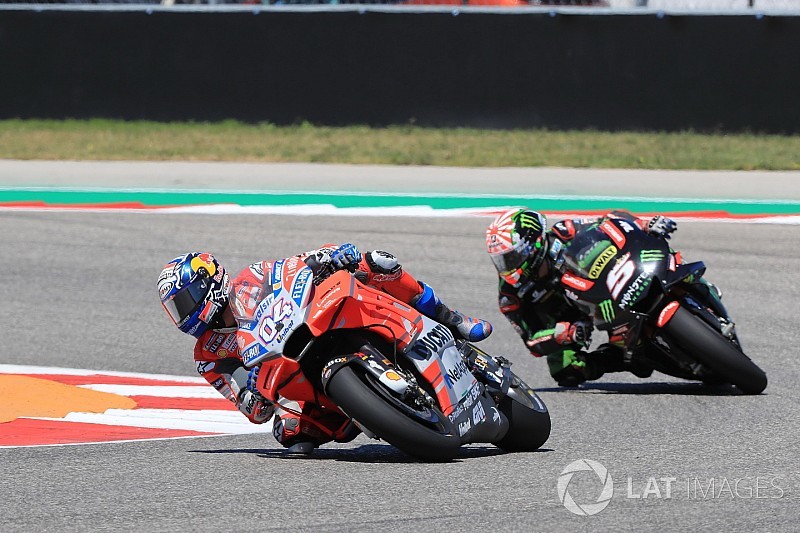 After winning the Qatar season opener, Dovizioso has had two low-key rounds, finishing sixth in Argentina and then fifth at the Circuit of the Americas, 13 seconds down on race winner Marc Marquez.

Dovizioso complained about the Austin track not suiting his bike during the weekend, with the bike struggling mid-corner and wheelieing also compromising acceleration out of the first-gear corners.

After the race, the Italian said the Austin race confirmed the bike's weaknesses are still "too big", and that he still can't be competitive on Ducati's less favourable tracks.

"We confirm still our negative point is too big," he said. "In the end I took the maximum, we already knew before the race we couldn't be fast in this track.

"It is logical that during the winter you work and you expect to improve, but in the end not that much, because it’s only when you arrive at certain tracks you understand in detail where you are.

"We are still not as competitive as our opponents in the middle of the corner. And I expected this.

"The Honda looks superior. In the winter they managed to improve further and that’s why all the Honda riders got stronger, while we could not do enough on the tracks where we have trouble.

"I was hoping for more in Argentina and here."

Dovizioso holds a one-point advantage over Marquez in the standings, and says he is satisfied to be in a stronger position after the first three races than he was this time a year ago.

"The championship is very close, so not important, but at the end after three races, it means we manage the three races in a good way," he said. "Not in a perfect way, but in a good way."

Dovizioso added he will have to wait until June's Mugello race to see if he can continue his consistent race-winning form on Ducati's stronger tracks.

"We have to wait Mugello if it will be like last year or no," he said. "I am not so relaxed about that. Looks like Suzuki is stronger and a lot of riders are stronger than last year."

Lorenzo: Rossi copied me when he returned to Yamaha