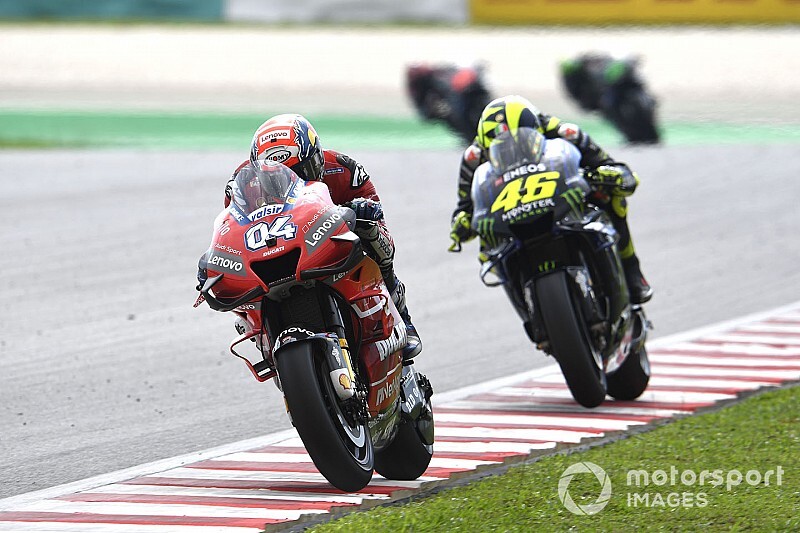 Andrea Dovizioso has claimed that the difference between his MotoGP engine and the Yamaha is the "biggest since I've been at Ducati", as he kept Valentino Rossi at bay during the Malaysian Grand Prix.

The Yamaha riders have long been struggling with the M1's top speed deficit compared to other bikes, while Ducati has always enjoyed superior engine power.

In last weekend's Sepang race, Rossi started to attack Dovizioso for third place on lap 7 of 20, but the Yamaha rider was unable to make a move stick, having to settle for fourth while his teammate Maverick Vinales took a dominant victory.

Dovizioso had the highest average top speed of all riders in the race with 330.2km/h while Rossi, despite his attempts to slipstream, only managed 321.6km/h.

While highlighting the gap has never been this big, Dovizioso also outlined Yamaha's superiority in corners, which is why they can be so much more successful in qualifying.

"The difference today [Sunday] was that the Yamaha has the biggest engine gap since I've been on Ducati. When you're in fifth and sixth [gears] on the straights, the difference is big.

"In the other corners, they may accelerate less, but they come out of the curve stronger and that's why they do better in qualifying.

"Just think of the gap they give us in qualifying, even though they are so far behind in terms of engine: this shows how fast they are in curves. This is a classic situation anyway."

Dovizioso added that it was crucial for him to stay ahead of Rossi, otherwise his soft tyre wouldn't have lasted.

"If you're always ahead, you never know if he's going to prepare the party for you or if he's at the limit too, so it's right to stay ahead and do the right things," said the Italian.

"I tried to stay in front, because it seemed to me quite extreme when he tried to pass me, so I thought that keeping up the pace would be difficult.

"I did it, I was soft and I used little power, because otherwise the tyre wouldn't have made it. It dropped a lot, but that's normal, because in Malaysia it's always like that in the race".

Dovizioso was pleased with his own result when compared to last year, when he was the top Ducati rider in sixth, but he hoped he would be able to fight with Marc Marquez.

"It's really good the gap we've made," he said. "In the past we've always suffered races in the real Malaysian heat.

"Honestly, I was hoping for a little more after the good start, because I was there at the pace level. Maverick knew he had something extra, but I thought I could challenge Marc.

"Unfortunately I went wide twice and it was over, but I did those [mistakes] because I tried to do a little bit more and it didn't work."

Zarco: I'm "back to the reality of top riding" with Honda