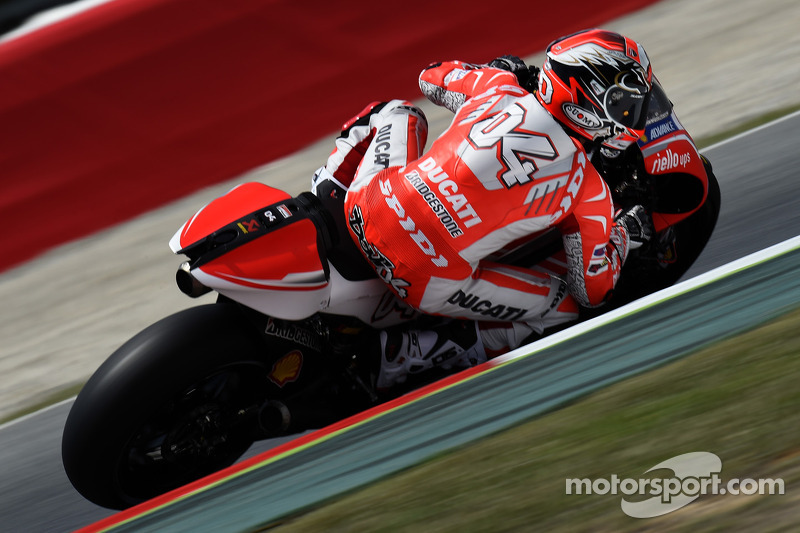 Andrea Dovizioso: "For sure eighth place is not a great result in itself, but we were able to cut the gap by half from last year."

Andrea Dovizioso finished the Catalunya Grand Prix, round 7 of the MotoGP World Championship held today at the Montmeló circuit near Barcelona, in eighth place. Starting from row 3 of the grid, the Italian rider kept up a good pace for the 25 laps, and he took the chequered flag just behind Pol Espargarò, with whom he had battled for much of the race.

Unfortunately his team-mate Cal Crutchlow continues to be hit by bad luck. This time the British rider returned to the pits after ten laps because of a technical problem that led him to retire.

The two Ducati Team riders will now remain behind at the Catalan track tomorrow to take part in the IRTA tests, together with Pirro, who will also be at Montmeló on Tuesday and Wednesday to continue development work on the GP14 and test new software.

Andrea Dovizioso (Ducati Team #04) – 8th: “I am pleased with the pace that we managed to keep up for the entire race as well as the final gap, and this is the most important aspect from today. For sure eighth place is not a great result in itself, but we were able to cut the gap by half from last year, in a race that was even faster. I fought it out with Pol Espargarò for almost the entire race, and we were separated by just a few thousandths of a second at the end. I think we obtained the best possible result this weekend.”

Cal Crutchlow (Ducati Team #35) – DNF: “Unfortunately also here at Barcelona I never managed to finish the race. We had a problem from the first laps with the bike, which was behaving strange and it didn’t allow me to ride the way I wanted to. Then a load of warning lights came on, the bike stopped and I had to retire. We’re not having much luck at the moment, but we have to arrive positive to the next race and try our best again: I’m not one to give up and Assen was kind to me last year so hopefully we can have a good race there and reverse the trend.”

Michele Pirro (Ducati Test Team #51) – 14th: “To be honest I hoped to do a bit better today, but right from the early laps I realized that the bike had a problem with the electronics. As I was racing with new software, maybe it was just a teething problem. At this point I concentrated on finishing to gather some useful indications for future development.”

Luigi Dall’Igna (Ducati Corse General Manager): “Obviously we are very disappointed that once again Cal’s bike had a problem during the race: it’s something that should not happen. We are analyzing all the data carefully to understand the true nature of the problem. Andrea gave his all right until the very end, recording a time of 1’43.3 on the final lap and keeping a constant pace throughout the entire race. We’ve still got a lot of work to do but at this moment, if we look at our gap from the front guys, we can be moderately satisfied.”