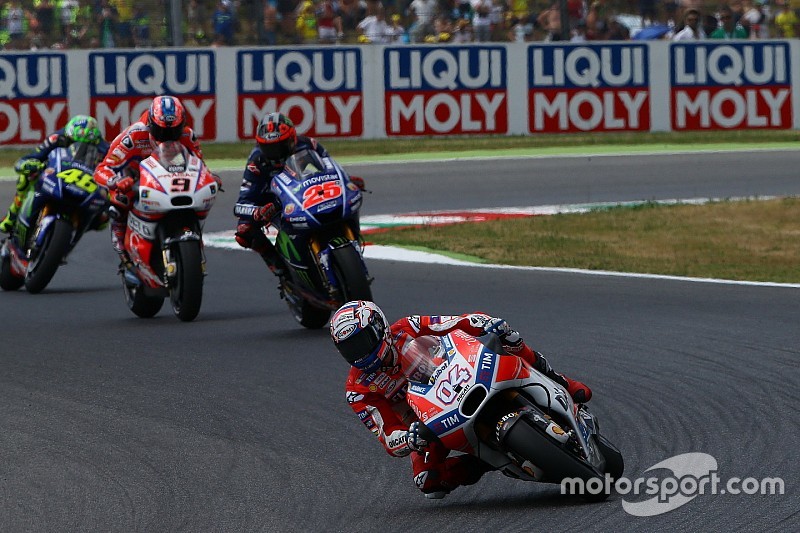 Italian Grand Prix winner Andrea Dovizioso admits he was “scared” he would run out of stamina in the race, having come down with food poisoning overnight.

The Ducati rider was third in Saturday qualifying at Mugello, but woke up feeling unwell on race day and didn't do any meaningful running in the warm-up session.

Despite his sickness, Dovizioso managed to stay with the lead group in the grand prix itself and picked off championship leader Maverick Vinales with 10 laps left to claim his first MotoGP win in the dry.

“Very strange day for me, the strangest [part] is the victory,” Dovizioso said after the race.

“I didn't have energy, we didn't make the warm-up – fortunately we didn't have to try something because our situation [with the bike] was really good.

“10 laps to the end I decided to overtake him but without a strategy. And after I realised nobody had margin to be faster, so I was focusing on my rhythm, my pace.”

Not sure of victory until final corner

Dovizioso said that he had not been targeting victory heading into the Italian GP, but that his pace in practice made him realise a win was possible.

“But from the first practice we showed a good speed. When I realise we have a chance to fight? It was free practice four yesterday.”

Once in the lead in the race itself, Dovizioso steadily increased his gap over the chasing pack, which included Pramac Ducati's Danilo Petrucci and the Yamaha duo of Vinales and Valentino Rossi.

But Dovizioso still expected his victory to be under threat in the closing stages.

“During the race I had a strange feeling, it was difficult for me to understand – most of the time Valentino has something to the end of the race, and here he's very strong, so I had that question mark,” Dovizioso explained.

“Danilo had closed the gap to me and was zero [seconds behind], and in the battle Danilo was really strong. So just in the last corner I realised I was able to win.

"In the last lap I had eight tenths [over Vinales], but I couldn't understand if he'd close the gap during the lap, and if he was able to try to overtake me in the last corner – I didn't know, I didn't feel, I didn't hear.”

Vinales admits it was Dovizioso’s “day to win” at Mugello

Crutchlow fed up of Pedrosa's "ruthless moves" after crash