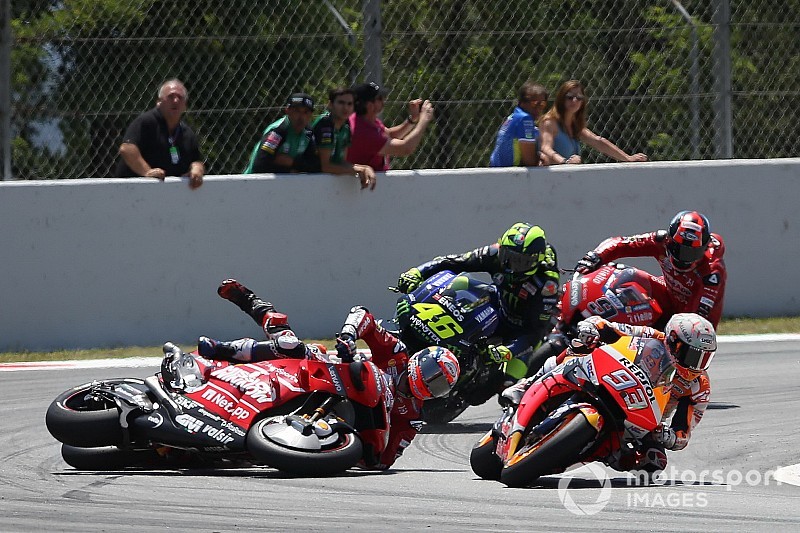 Andrea Dovizioso believes MotoGP rival Jorge Lorenzo wasn't thinking clearly when he made his "big mistake" and caused a multi-bike accident in Barcelona.

Dovizioso was battling championship rival Marc Marquez for the lead of the race when he was wiped out by former teammate Lorenzo, who lost control of his bike while trying to pass Maverick Vinales under braking into Turn 10.

In addition to Lorenzo and Dovizioso, the crash also took out Vinales and his Yamaha teammate Valentino Rossi, leaving the leading pack decimated and allowing Marquez to escape into the distance.

"It's quite clear what happened," Dovizioso said after the race. "I think Jorge was in a good position, he gained a lot of positions at the start, in the pace he wasn't too far and he really wanted to be in front at the beginning, and he did a big mistake.

"That corner it's very easy to make a mistake, because that corner is in first gear and you have to come back [in the opposite direction].

"So a small mistake at the end can be a big mistake. He wasn't lucid in that moment, because he wanted to overtake Maverick, but he didn't look where he braked because Maverick braked late. “He was a bit long and he braked later than Maverick, so this means in the end he was too fast and he was inside."

Asked to respond to suggestions that he himself contributed to the crash by checking up on corner entry ahead of Lorenzo, Dovizioso said: "Those who say that never raced or don't understand anything about bikes."

Vinales and Dovizioso both called for Lorenzo to be penalised by the stewards, although in the end the three-time MotoGP champion escaped sanction.

Dovizioso felt that Lorenzo's error by itself was "not crazy", but stressed that its severity was exacerbated by the context.

"The mistake, if you look at this from a rider's [perspective] is not too big, but to make that in that corner in the second lap is a big mistake," Dovizioso said.

"So from a champion like him it's a big mistake, and this created a big change on the championship because a lot of fast riders fighting for the championship did another zero, and Marc won."

And though Marquez had passed him for the lead moments before the crash, Dovizioso felt he would've had the pace to challenge the championship leader had he stayed in the race.

"We know how strong Marc is, and we had a chance to fight today.

"He did a really good pace today, but we had our chance and we did a good start. I put myself in the right position.

"I was waiting to prepare the rear tyre, because still at that moment the rear didn't work, the soft [compound] takes three laps to be ready."

Lorenzo admits he rode "too excited" before four-bike crash