Dovizioso: Lorenzo didn't hold me up despite team orders 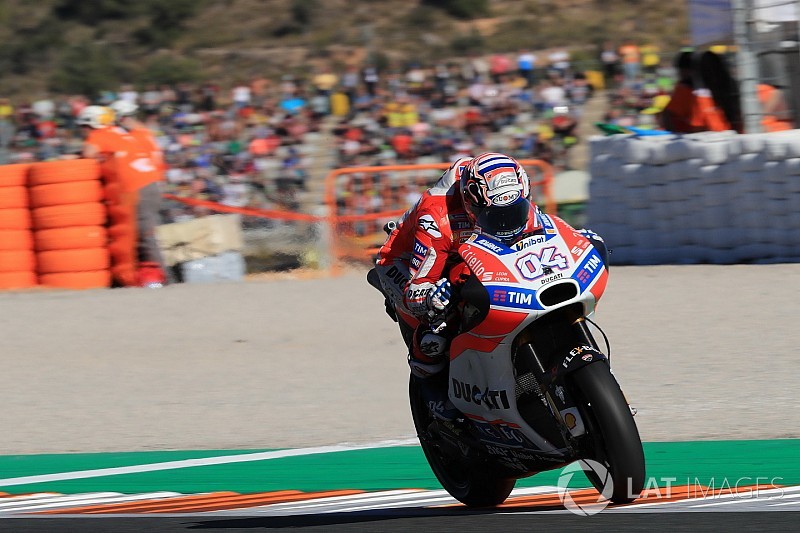 In a race he had to win to stand any chance of beating Marc Marquez to the title, Dovizioso crashed out on lap 25 of 30, just a handful of corners after Lorenzo had fallen.

The pair ran fourth and fifth for the majority of the race, as Marquez settled into second place behind leader Johann Zarco, with Lorenzo seemingly holding up Dovizioso.

After a number of laps of running in formation, Lorenzo was given the coded 'Suggested Mapping 8' instruction on his dashboard, which was later followed by a '-1' on his pitboard.

However, Dovizioso said he was happy for Lorenzo to lead him during the race, and said he wouldn't have been fast enough to catch the leaders even if the Spaniard had moved over.

"I'm happy because we tried until the end, and it was open until 10 laps to the end," Dovizioso told BT Sport.

"We improved during the weekend, but we weren't fast enough. I was really on the limit from the first lap.

"At the beginning I wanted to overtake Jorge, but in some corners I was slower, at the end he created a good pace.

"It was good for me to follow him, I could stay with them, but we were over the limit the whole race. We both did a mistake."

"We have to be happy, happy about the championship."

Marquez ended up finishing third behind Dani Pedrosa and Zarco after a major scare at Turn 1 at the start of lap 24, almost crashing and running deep into the gravel trap.

Asked what went through his mind when he saw Marquez almost crash out ahead of him, Dovizioso replied: "We are not surprised about that! This is a standard thing for Marc.

"But I didn't have the speed to really attack the riders in front of me. When I saw I was like 'OK!' but I was completely finished.

"I tried even harder, when I saw that, but I already pushed 100 percent until that time."