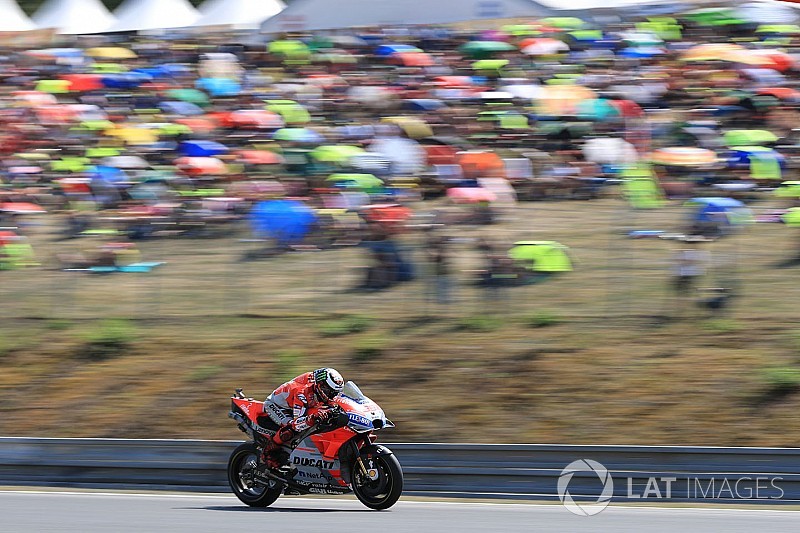 Factory Ducati riders Andrea Dovizioso and Jorge Lorenzo plan to use the new aerodynamic fairing that was introduced by the team for MotoGP's Czech Grand Prix.

Pramac Ducati rider Danilo Petrucci was first to test the new fairing, which features a slimmer pair of upper winglets, on Friday, the Italian ending the day second fastest.

That led to Lorenzo and Dovizioso both trying it on Saturday, and while both riders agreed the benefits are not so big, they are both keen to keep it for Sunday's race.

"New fairing, I didn’t find any negative points," Lorenzo said. "It’s not so much different from the fairings we were using.

"Some small positive points, so probably I will keep it for the race [but it] was not the biggest improvement today."

Dovizioso, who took his first pole position since the 2016 Malaysian Grand Prix with the new fairing, said the bike has improved on braking thanks to the revised bodywork.

“Yes, looks like we will use [the new fairing] tomorrow," he said. "The difference is not clear, it's always difficult [to understand] when you try something like that.

"It's difficult to understand exactly the difference. Looks a bit better on the braking, maybe, but from the morning to the afternoon we change also the tyres.

"So we didn't have enough time to make a real comparison, so it's not clear the positive things and if there is any negative things."

Petrucci reverted to the standard fairing in Saturday practice, having damaged a part of it on Friday, but was able to use the new version again for qualifying and took sixth on the grid with it.

Dovizioso, meanwhile, admitted that he "didn't expect" to take pole position, and thought the sector times showed the wrong time during his lap as it was "too fast".

He said: "Too happy, really happy, I didn't expect. I felt good but not like this.

"When I started the last lap, I felt a really good support from the bike, was able to brake really hard, and the bike answered in a perfect way.

"During the lap I started to think the intermediates [sector times] were wrong because the laptime was too fast. Sometimes [this] happens.

"I don't know about the race, if we can really fight for victory, but the feeling is good."