Andrea Dovizioso believes the outcome of the Barcelona MotoGP race will allow his title rival Marc Marquez to manage risks in the championship battle and “race to the second rider”. 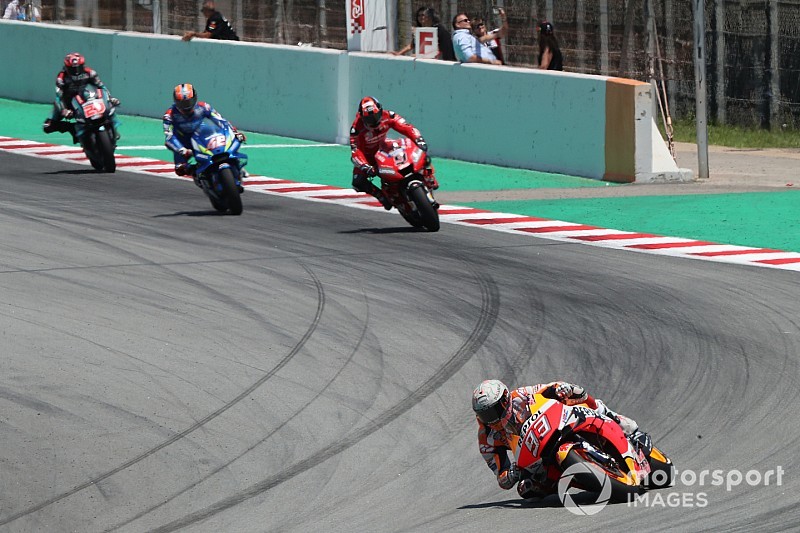 Dovizioso was among the three riders taken out as collateral in Jorge Lorenzo's Turn 10 crash on the second lap of the Catalan Grand Prix, which left Marquez with a sizeable lead out front and allowed him to control the race from there.

And while the Italian remains Marquez's nearest rival in the standings, his deficit to the Spaniard is up to 37 points from a previous 12.

“The really bad thing is Marc in this situation is smart and, like last year, normally races to the second rider in the championship,” said Dovizioso, who has finished runner-up to Marquez for two years running.

“So he will be maybe not on the limit like now and have to push 100 percent of the time.

“That is bad, [as] this is what we wanted this season, and before this race we were there to put him on the limit, and everybody can make a mistake. But it is what it is.”

Maverick Vinales, who was also caught up on Lorenzo's crash, said it “destroyed” Dovizioso's championship, while LCR Honda's Cal Crutchlow described the title battle as “finished”, before quipping: “It was already finished in Qatar.”

But both Marquez and Dovizioso dismissed the suggestion that the former's 37-point lead was unassailable, with 12 races of 19 still to run.

“If I think in this way I will not race the next race, so for sure not at all, because anything can happen in our sport,” said Dovizioso when asked whether Lorenzo's mistake had already decided the title battle.

“We are strong, we are working really hard. Still there is a lot of points [up for grabs].

“It's bad because Marc has a big gap now, and you know Marc is normally competitive in every condition. So it's not easy to gain a lot of points to Marc, but it's not impossible.”

Marquez, meanwhile stressed that “now everything looks easy, but it's not easy”.

“We are pushing, today [Sunday] I took a risk, today I nearly lost the front in Turn 5 and today I was riding in a good way,” he continued.

“Even like this there were some riders there who were pushing me, and you never know. The championship is very long, we are just in the seventh race and we have to keep going.”

"Fool" Lorenzo "out of control" on warm-up laps - Miller