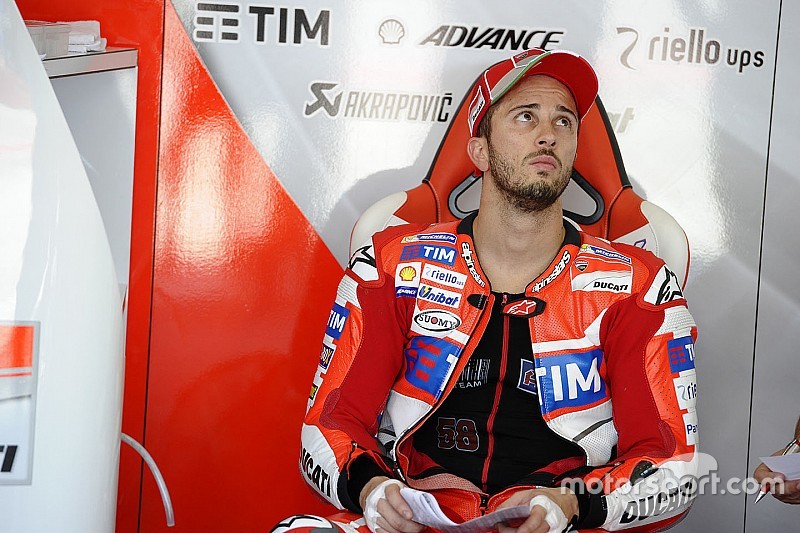 Andrea Dovizioso said Ducati's sixth and seventh place at Misano was the current "reality" for the team, despite a prior run of solid results.

Andrea Iannone scored Ducati's first MotoGP win since 2010 at Spielberg in August and was fighting for second place last weekend at Silverstone before crashing.

However, the Italian team's bikes were well behind the Yamahas and Hondas - as well as Suzuki's Maverick Vinales - at Misano, finishing only sixth and seventh.

Dovizioso, who led his one-off teammate Michele Pirro, was disappointed with the result and said the Ducati Desmosedici GP16 still needs to be worked on.

"The reality is the final result of the race. This is the reality and we have to understand everything we can to try to improve.

"On some tracks, we can be closer but still we have some limit and when the race is fast like today, the pace is really fast, it's difficult.

"I knew from yesterday, when I followed competitors, [there are] some negative points on our bike but during the race it was bigger.

"I couldn't have the pace from the beginning so [I am] disappointed, but this is the reality. We have to take everything to try to improve, this is the only thing we can do."

"Difficult" but "not so bad" race for Pirro

Pirro, who was originally pencilled in as a wildcard entrant but ended up replacing the injured Iannone, said seventh place was the best he could have achieved.

"My race was not so bad, I was only two, three tenths slower than the riders ahead of me," Pirro said.

"My race was compromised especially in the start because I lost four positions in the start and the first two-three laps sometimes I make a mistake because I push a lot.

"After that my lap times were very consistent but it was impossible to close the gap with Vinales and Dovi.

"The grip was very difficult to control and I lose on the exit of some corners, I lost time compared to other riders."