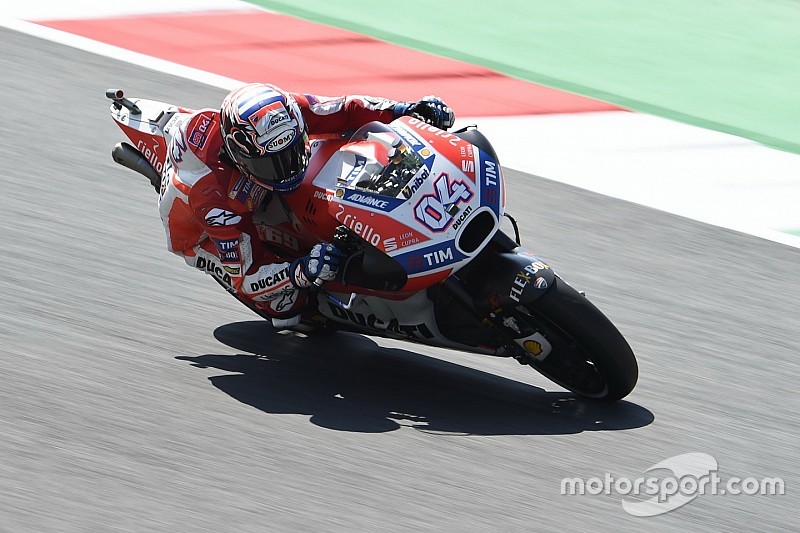 Ducati’s Andrea Dovizioso has downplayed his chances of fighting for the MotoGP championship, despite moving into second in the points with his Mugello victory.

Dovizioso claimed his third premier class win at Mugello on Sunday, and his first in dry conditions, beating Yamaha's Maverick Vinales to become his closest rival in the standings, 26 points adrift.

However Dovizioso remains wary of the Ducati's mid-corner weakness, and does not believe it has suddenly found a cure to that to win its home race.

"Every weekend is a different story so we have to be positive," he said.

"This result for sure will make effect, but we didn't change something special on the bike, that's why I can't say 'now we fight for the championship'.

"I'm always realistic. A lot of people call me negative, but I call [myself] realistic. And until now, we can be really fast in some races but our base in 18 races is not good enough.

"For sure, after you see this weekend, everybody thinking about it."

He added: "Now we have a race next weekend [at Barcelona], so we will see very easily in a completely different track where the grip is very low and the asphalt is not so good.

"Last year we struggled a lot, so we will see soon our competitiveness. We are second in the championship, so we are not too bad.

"But to think about fighting with them every weekend and to arrive at the end of the season and fight for the championship, it will be difficult."

Ducati won for the first time since 2010 last season, with Dovizioso and former teammate Andrea Iannone each taking a victory.

It has not taken a significant enough step to be a regular 2017 frontrunner, with Dovizioso's front-row start at Mugello its first of the season, while it had just two podiums to its name.

Yamaha with three victories, Honda two and now Ducati have won races this year, and Dovizioso feels momentum will shift circuit to circuit.

"I think it's a lot about technical situation," he said. "For example, normally it's Yamaha and Honda, [Mugello is] the first time for us to really fight for the victory.

"But also, because everybody's very very close, I think small things can make a big difference at the end of the race.

"Sometimes, maybe the bikes are not so different, but the way the riders arrive to the weekend, the layout of the track, the feeling or if you make a crash sometimes can make a bigger gap."