Dovizioso: No good being "pissed off" at Ducati deficit

Andrea Dovizioso says there is no point in being "pissed off" about the failings of his Ducati MotoGP bike after a disappointing run to sixth place at Misano.

Having recovered from his violent first-corner crash last time out at Silverstone, Dovizioso qualified sixth and finished in the same position in the San Marino Grand Prix, a little under 14 seconds adrift of race winner Marc Marquez.

It came as all the Ducati runners struggled, with the Bologna marque's next highest-representative being Jack Miller in ninth, a further 13s down on Dovizioso.

After qualifying, Dovizioso conceded that Ducati expected to struggle to match Honda and Yamaha based on the evidence of the two-day test at the same track two weeks prior.

Post-race, the two-time MotoGP runner-up emphasised the need to remain "calm" faced with the current limitations of the Desmosedici.

"It's a shame about the position, but for me we worked really well over the weekend, being aware of this situation from the tests," said Dovizioso. "When that's the case you have to stay calm, work well and that's what we did.

"I appear calm because I understand what we are capable of, which is to bring home the maximum with what we have at our disposal. I don’t need to worry about other things or do different things compared with what we’re doing right now.

"We are working hard, we are trying. But if go out on track and you are pissed off, it doesn’t change anything.

"We have to try and bring home the maximum like today. [In this case] it’s a sixth place at 13 seconds [to the winner], which isn’t great. Meanwhile, the important thing is to do that.

"Then there are other conversations to be had, but these we do internally."

Marquez's seventh victory of the season means that he carries a mammoth 93-point championship lead with only 150 points still up for grabs in the final six races.

But Dovizioso underlined that he had already stopped worrying about the size of the gap between himself and Marquez in the standings several races ago.

"There's no need to raise the white flag," said the Italian. "The gap was already big, so we can only try and bring home the maximum.

"But we can't talk about trying to close the gap if we are finishing behind in the race."

On his prospects for this weekend's Aragon race, he added: "Last year we fought for victory with Marc and in the end there was also [Andrea] Iannone [on the Suzuki]. But now the Yamahas are also improving, so I expect them to be competitive in Aragon.

"Like here, however, we have to try to stay calm and bring home the maximum. We can't do anything else." 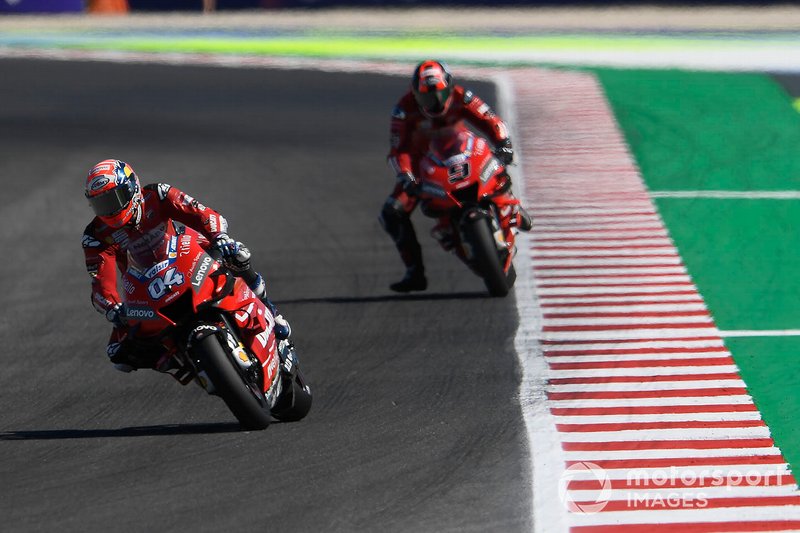