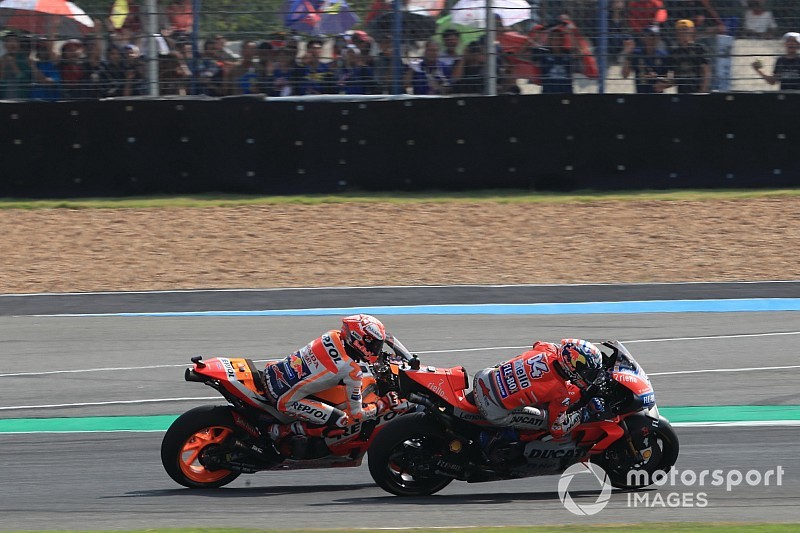 Andrea Dovizioso said he didn't have the ideal strategy on the final lap of the Thailand Grand Prix, in which he was beaten to victory by Marc Marquez.

MotoGP's first-ever race at Buriram was the latest chapter of the on-track rivalry between Marquez and Dovizioso, with the outcome again decided at the last corner.

However, while Marquez was on the losing end in previous cases, this time he managed to prevail and take the chequered flag first.

The Honda rider had made a crucial overtake on Dovizioso at Turn 5, and the Italian unsuccessfully attempted to immediately reclaim the lead.

In the end, he could only try to make a block pass at the final turn, and Marquez saw off the attack to emerge victorious.

Dovizioso explained that his attempts to reclaim the lead right away ultimately compromised the rest of his lap.

"Unfortunately I didn’t make a perfect strategy because I didn’t know the positive and negative points of Marc, because I was always in front of him.

"And when he overtake me in Turn 5, I tried to answer immediately, because I thought I didn’t have any chance to answer until the last corner, that’s why I tried that.

"But didn’t work because I lost time in Turn 6, and I realised in Turn 10 he was in trouble with the tyres. I didn’t know [beforehand].

"I was able to recover some metres, but not enough to be very close to stop him in the last braking zone.

"If I didn’t try in Turn 5, I could have tried in a different way in the last corner.

"With Marc you never know how he’ll handle it, but I was too far [behind] to make a really good brake and stop him.

"I was hoping Marc would go long with me but he was able to stop the bike a bit better than me."

Marquez said his strategy was the same as in the Red Bull Ring battle against Jorge Lorenzo, as he sought to be in the lead for the final sector of the track.

"I try to manage in the same way like Austria with Jorge, to arrive in front in the last sector and that was the main target for me.

"In Austria I wasn't able because I was losing too much in Turn 3 but here I just prepare all the race, the overtake in Turn 5, and then I was able to do it.

"Then I say, okay, if Dovi arrive in front, he will win. But then I try just to play in another way my cards and it works well but very close.

"Both of us deserved the victory because he did a really good race."