Dovizioso: Risk was “too high” to fight for MotoGP hat-trick 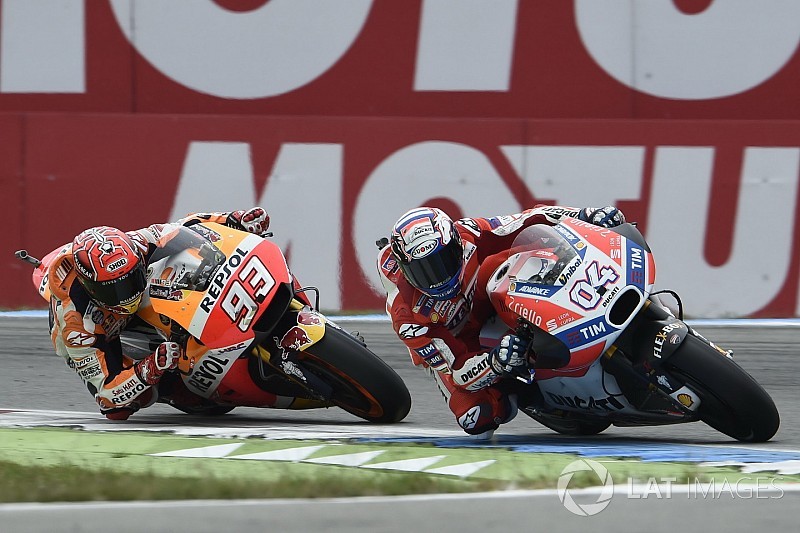 MotoGP points leader Andrea Dovizioso says the risk of going for a third straight win at Assen was too high, admitting to backing off in the closing stages.

The Italian rider, who finished fifth in the Netherlands, now leads the championship by four points from Maverick Vinales, who crashed out for the second time this year.

Following back-to-back wins at Mugello and Barcelona, Dovizioso appeared to be in a position to fight for a third victory on the trot late in the race, surging from ninth on the grid to join the leading group with 10 laps remaining.

But the arrival of light rain in the closing stages meant the 31-year-old started to take fewer risks, and he was ultimately beaten by Honda duo Marc Marquez and Cal Crutchlow in an extremely tight battle for the final podium spot.

“It was impossible to understand if the corners were wet, and which corners were more wet, so the risk was too high.

“It’s normal Valentino [Rossi] and Danilo [Petrucci] were able to take more risks because of the situation they have in the championship, I had to slow down and I couldn’t fight for the victory.”

“For sure after the last two races, we confirmed we can fight, so this is a good motivation to bring on the next races. But like today, it was really tricky conditions and there was no reason to crash.

“In this championship, it’s so important to not make a zero. Unfortunately we already did it [in Argentina], it wasn’t my fault, and this will affect the championship.

“Sometimes, like today, you don’t take all the risks you could take.”

Marquez would have “signed” for result

Reigning champion Marquez also admitted he was not pushing to the maximum, eager to avoid a third non-finish of the campaign, but was delighted to leave Assen only 11 points behind new leader Dovizioso.

“I was risking a lot, but when Valentino passed me I was comfortable enough behind him until the rain came,” said Marquez.

“I knew Vinales was out of the race. I could have risked it all, but I hedged my bets and risked it only in the key moments.

“We only think about the leader [of the championship], and if on Thursday I was told I would leave here only 11 points behind, I would have signed.

“The championship is very long, we are not even halfway and look at all that has happened. I’ve already played two ‘jokers’ this year and this weighs heavily.”

“Very slow” Lorenzo had “nothing to lose” by pitting