Dovizioso tried to break up Brno pack with "strange" pace 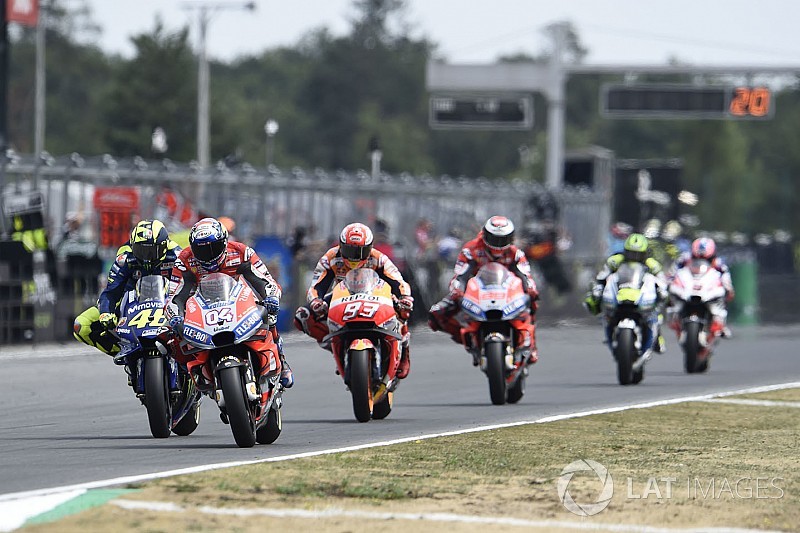 Brno MotoGP race winner Andrea Dovizioso says his “strange” pace out front was a deliberate attempt to break up the pack behind him.

Dovizioso led all but three laps in the grand prix, but ran an initial pace that was almost a second down from what had been projected from practice – as he and other frontrunners worked to preserve the tyres.

This meant the Italian spent the first half of the race at the head of what was at one point an 11-bike lead group, and Dovizioso admitted he tried to disrupt those behind him by varying his speed – having at one point gone from mid-1m57s to high-1m56s and then high-1m57s in the span of three laps.

“At the beginning, I was trying to make something strange, because the [lead] group was big.

“Is always better to have less riders when you start to fight [for the win], especially when you have to manage the tyre.

“But [it] didn't work. Because the group stayed six [bikes] until five laps to the end, maybe.”

The Italian said he was expecting a stern late-race challenge from Honda's Marc Marquez, who followed him close for much of the race before slipping behind Dovizioso's Ducati teammate Jorge Lorenzo.

“I decide the strategy lap-by-lap,” he said. “I was trying to understand the [main] competitor, Valentino [Rossi], for the first laps of the race.

“At the end I was waiting for Marc because I heard his engine in every braking [point] and every time he opened the throttle. I thought he had some margin.

“But at the end Jorge came with a really good speed and we started battling. It wasn't easy because the last five laps the tyre dropped, I think for everybody.”

Brno marked Dovizioso's first win since the season opener in Qatar, but the Italian insisted this victory drought has concealed the improvement Ducati has made with its 2018 bike.

“For sure, when you win six races, like last year, everybody expects you have to win. So we won just one in Qatar and everybody says, you are living a bad moment.

“But if you really study everything, it wasn't like this, because we are faster than last year in every track.

“I think we did a small step during the winter. We did three mistakes [in the season] – if you look at the championship and if you look at the last two results before this, you can think that [Ducati got worse], but if you study the details, if you look at last year, you make a comparison, it's not like this.

“And this weekend is the confirm[ation], our bike is a bit better than last year.”

However, Dovizioso stressed he is “still not happy 100 percent” as he believes the Ducati is lacking in tyre management – which is something he intends to work on in the post-grand prix test day.

“I don't know if it's our bike or the tyre, we are working on that. This weekend we improve a little bit to manage [the tyres], but still I'm not happy about that detail.”