Andrea Dovizioso says tyre management races are "almost gone" from MotoGP in 2019, and suggests this may have contributed to Ducati losing ground.

Dovizioso is on course to finish runner-up for a third consecutive season, but he and Ducati have both scored fewer wins that at this same stage in the past two years - and he's admitted champion Marc Marquez has established a "bigger gap".

In Thailand, Dovizioso was powerless to stop Marquez from clinching the title with four races to spare, as he had to settle for a distant fourth.

Asked whether Ducati had regressed compared to the 2018 Buriram race, in which he fought for victory, Dovizioso said: "They are faster, the competitors. And the tyres are different.

"We are doing a lot of races with a lot of speed from the first lap to the end. Last year and the year before, the races were a bit different because the tyre was different.

"If you see the pace of [long-time race leader Fabio] Quartararo, it's in three tenths, so fast. So, this is the reality, and there is a big change of MotoGP in this season compared to last year."

He added: "We were used to management races, but now they are almost gone."

Marquez's run to his second victory in Thailand in 2019 was nearly 20 seconds faster than in the inaugural Buriram race the year prior.

Asked if the Michelin tyres being more durable was what contributed to the change in the balance of power in MotoGP, Dovizioso said: "That would make sense, but you can't answer for sure.

"I'm the same as I was, and the tracks haven't changed. But they [Michelin] give the same material for everyone, so we have to adapt."

Dovizioso's teammate Danilo Petrucci showed signs of recovering from his recent slump during the Thailand weekend, but ultimately regressed to a ninth-place finish in the race.

"For sure I'm not satisfied, especially [about] the first six-seven laps," Petrucci said. "I don't understand why I exited from the first corner in fourth position, and at the end of the main straight I was in eighth.

"[After that] the gap to Dovi was two tenths, three tenths every lap. I am happy for this, even if I would like to say that I would be happier if the gap was zero.

"For sure a little step forward compared to the last races, but it's not the way I want." 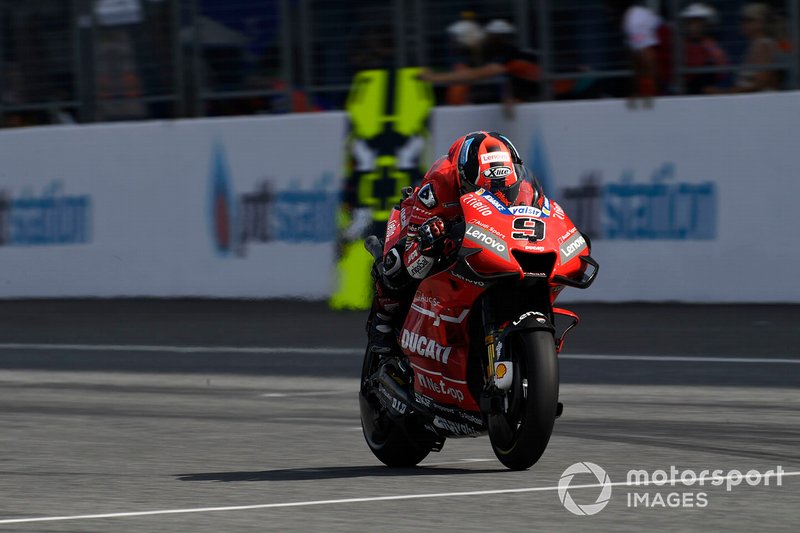