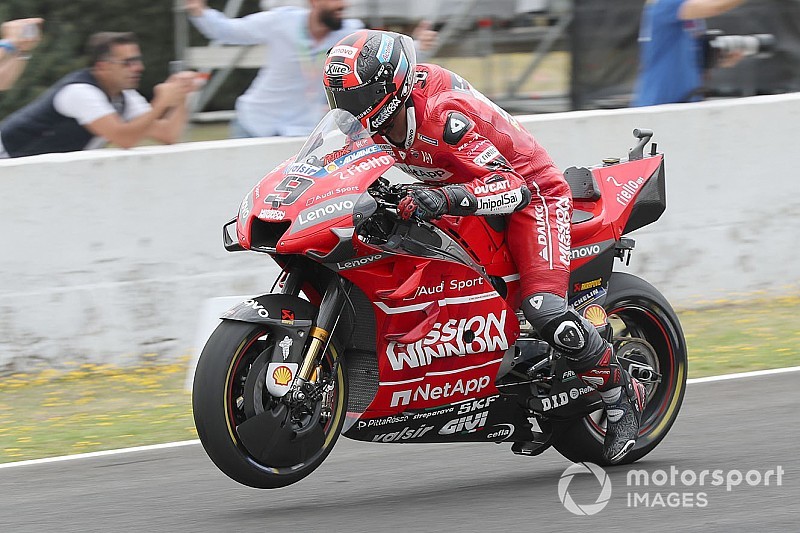 The factory Ducati MotoGP team will not run its controversial 'Mission Winnow' branding in next weekend's French Grand Prix at Le Mans.

The Italian manufacturer follows in the footsteps of the Ferrari Formula 1 team - with which it shares the same title sponsor, Philip Morris International - after the Scuderia scrapped the branding for the season-opening Australian Grand Prix in March.

Its entry name will also be changed to simply 'Ducati Team' for the Le Mans race on May 19.

Ducati has instead opted to allow factory riders Andrea Dovizioso and Danilo Petrucci to create their own designs that will feature in the spaces where the 'Mission Winnow' logos would normally appear.

“It’s nice to put my name that big on the fairing and to be able to make my own logo,” commented Dovizioso, who finished fourth in last weekend's Spanish GP at Jerez. “It’s something we haven’t done before, and I’m looking forward to see how it will look on my Desmosedici GP in Le Mans.”

Petrucci, fifth in Jerez, added: “Imagine all the photos with my name on a red Desmosedici GP. To ride a Ducati with my name on it in MotoGP is simply fantastic. I would have never dreamed about this.”

The French GP is one of two MotoGP races where Ducati plans to race without its 'Mission Winnow' logos, the other being October's Australian round at Phillip Island.

It appears on course to use the branding for its home race at Mugello, which follows Le Mans, despite the fact a complaint over the Ducati livery had been lodged by the Italian National Consumer Union (UNC) to the country’s Competition Authority earlier this year.

The Ferrari F1 team, meanwhile, is expected to drop the 'Mission Winnow' branding from its cars in June's Canadian GP as well as the French GP at Paul Ricard.