The Ducati Marlboro Team presented today in Madonna di Campiglio their new Desmosedici GP6 with which will be competing this year in the FIM Road Racing World Championship Grand Prix (MotoGP) season. 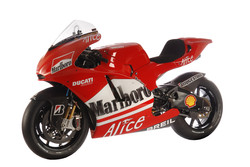 The new Ducati Desmosedici GP6.
Photo by Ducati Corse.
The presentation took place on the second day of the traditional Wrooom MotoGP Press Ski Meeting 2006, held in northern Italy. It included the presence of both riders, Loris Capirossi and Sete Gibernau, who joined the team for this year.

Claudio Domenicali, the managing director of Ducati Corse, used the opportunity to explain the changes of the team's newest endeavor, along with the news that will carry the Desmosedici GP06 from now on.

"The Desmosedici GP6 represents an evolution of the GP5; apparently it doesn't present any marked differences with its predecessor, but it is in fact an important step forward," commented Domenicali. "The bike is lighter but we have done a lot of work on its stiffness (with the frame, rims and front forks), especially at the rear of the bike. The composite structure that we call the seat support has been totally redesigned and stiffness has been increased by more than 80%."

"The bike's ergonomics have undergone a notable evolution with the fuel tank modified in line with requests from the riders. We have also focused on the bike's 'driveability', and in this area we have made available a whole new range of instruments and technologies that will allow the race engineers to package the power behaviour and delivery of the engine according to the requests of the riders and the conditions of the track", he added.

About the new engine that will power the bike, Domenicali explained: "We work to modify the internal fluid dynamics and as a result we have a different thermodynamic layout. We have attempted to increase power as well as reduce fuel consumption, an area to which we have dedicated a lot of attention, by working maniacally on engine friction."

"One point of which we are particularly proud is the reliability of the bike; in 2005 we took part in 17 races with two riders, without ever having a problem, and we have also maintained this line for the next season", stated a satisfied Domenicali. 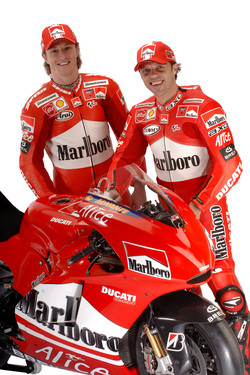 Sete Gibernau and Loris Capirossi with the new Ducati Desmosedici GP6.
Photo by Ducati Corse.
Loris Capirossi, who is in his fourth season of riding for Ducati, had the chance to comment on this new challenge for 2006 season that will start on March 26th in Jerez de la Frontera, Spain.

"We have an extremely efficient package with great potential, thanks to the development and evolution that the bike has had and to the collaboration with similarly motivated and capable partners, like Bridgestone, who demonstrated what they were capable of last year", Capirossi said.

On the challenge that will take place this season, the 32-year-old Italian commented: "We've still got some way to go obviously and our championship begins at the forthcoming tests in Malaysia. Our aim will be to produce good performances on a regular basis, which will be the key for the difficult season that lies ahead of us. The team is strong and motivated and everyone is working with great professionalism, expertise and seriousness, we are truly a great team!".

The best highlights for Capirossi and Ducati together are three victories (one in `03 and two in `05) and fourth place in the overall standings of 2003.

Tomorrow will be the final journey of the Wroom that had as another relevant point the announcement that the sponsorship deal between Ducati and Phillip Morris has been extended until 2011.

Biaggi moves to WSBK with Suzuki