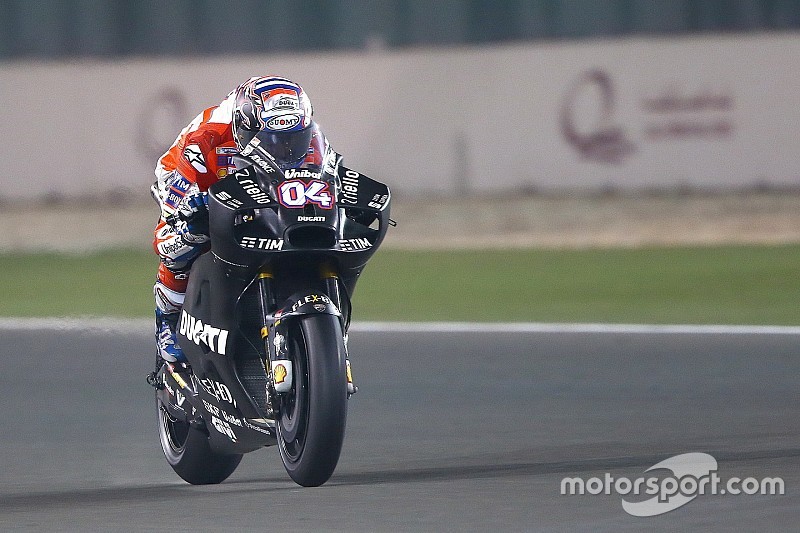 Andrea Dovizioso says Ducati is undecided whether it will continue to use the new MotoGP fairing it trialled during the second day of testing in Qatar.

The Borgo Panigale marque finally revealed its solution to tackling the winglet ban introduced at the end of last year, with Dovizioso’s bike sporting a radical new look when it took to the track on Saturday.

Having topped the opening day of running at Losail on Friday, Dovizioso ended up only 13th on the timesheets on the second day of the test, just over a second slower than pacesetter Maverick Vinales.

Speaking of the new fairing, the Italian said it helped recreate some of the effects of the old winglets, but was uncertain if it would be used for racing.

“The impression [with the fairing] is good,” Dovizioso said. “I think our engineers worked very well, because it was very difficult to create downforce with the new rules.

“I’m really happy with the result. Still it’s not fixed if we will use [it], but it was nice to feel the effect.”

Asked exactly what difference the new bodywork made, Dovizioso added: “[Like] the winglets last year, more downforce and more stability. You are able to accelerate more. But there are positives and negatives.”

Refusing to reveal whether he would use the fairing again on Sunday, Dovizioso said changing conditions were to blame for his slump down the leaderboard on Saturday.

“I’m quite happy, not happy like yesterday,” he said. “For sure the laptime at the end didn’t show the reality.

“Today we found completely different conditions, we found really bad grip and a lot of wind when we started. It was very difficult to manage the bike.

Dovizioso’s teammate Jorge Lorenzo ended up eighth-fastest, but did not trial the new fairing - although he is expected to do so on Sunday.