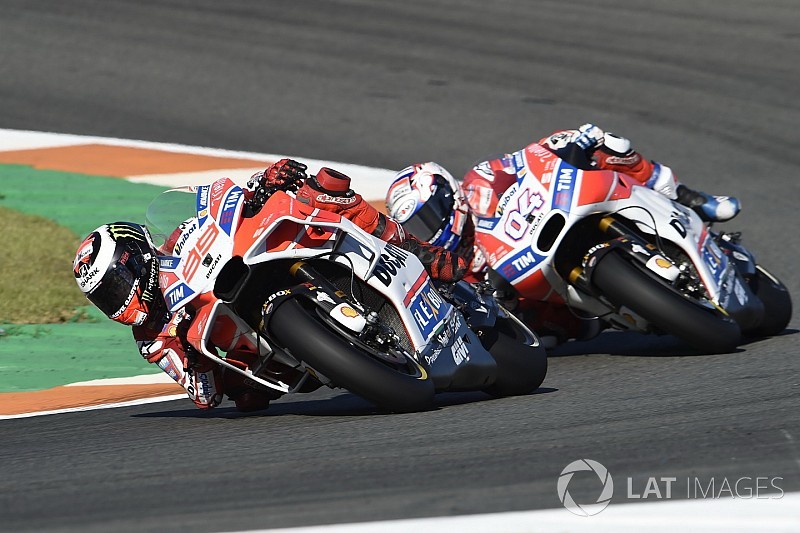 Ducati MotoGP technical boss Gigi Dall'Igna said that telling Jorge Lorenzo to give up his position to Andrea Dovizioso during the Valencia finale was the team's "misunderstanding".

Ducati duo Lorenzo and Dovizioso were running fourth and fifth behind Johann Zarco, Marc Marquez and Dani Pedrosa on Sunday when the team sent Lorenzo the dashboard message 'Suggested Mapping 8', a code that had been previously used for switching positions.

However, Lorenzo did not give up his spot to Dovizioso, who had to win in order to have a chance of the title, before both riders eventually crashed and retired in quick succession.

After the race, Lorenzo admitted he ignored Ducati's request because he thought he was quicker and could keep himself and Dovizioso in touch with the top three.

Dall'Igna echoed Lorenzo's claim, but conceded that Ducati misjudged the situation because it thought Dovizioso was quicker.

"This was a suggestion, not an order," he said. "I think it was our misunderstanding watching the TV.

"[Sunday's] race was the second one, so you had to be in the final part of the race in real close to the first rider and with the best possible rear tyre, because the wear of the rear tyre was a problem.

"Our suggestion was that the faster rider has to stay in front to stay in contact with the first riders with the possibility for Dovi to win the race and this was our goal during the race.

"Our opinion watching the TV was that Dovi was the fastest rider and so we would like that he was in front of Lorenzo. The riders had a different opinion.

"Lorenzo, when he saw our signal on the dashboard, tried to be a little bit faster and so that Dovi cannot catch him, and so he thought that he was the fastest rider and he continued on the front."

Dall'Igna is confident Lorenzo would have given up his position if he felt Dovizioso had a shot at the title.

"In the end, the rider and the bike for sure have more information than us sitting in the chair and watching the TV, apart from when it is absolutely logical," he added.

"I know [Lorenzo] very well and for sure if he has to let Dovi in front because he, Dovi, can win the championship, for sure he would have done this. I am quite confident and sure about that."