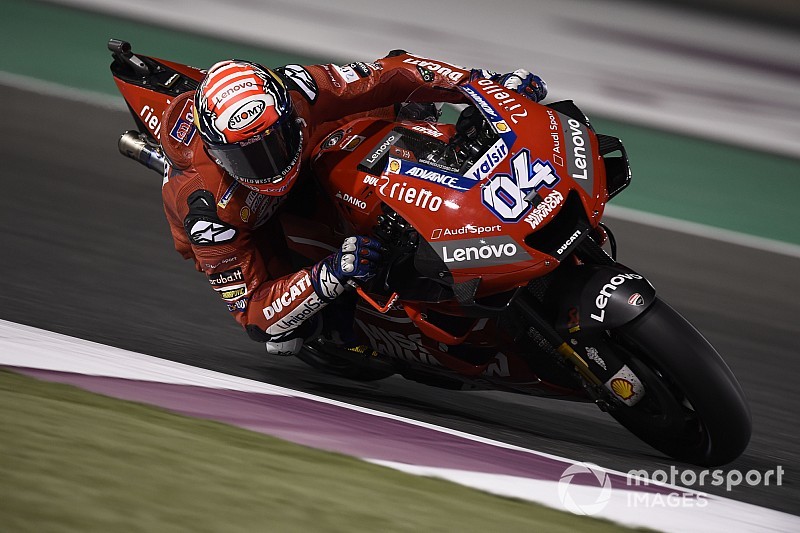 The controversial winglet ran by Ducati's Andrea Dovizioso on his way to victory in the MotoGP season-opening Qatar Grand Prix generates downforce, according to Formula 1 engineers.

Honda, Aprilia, Suzuki and KTM lodged a complaint against Ducati over the legality of the winglet, which the Italian manufacturer attached to the swingarm of its bike, claiming it is used to cool down the rear tyre.

While stewards in Qatar threw out the protest, the case was referred to the FIM Court of Appeals and a decision is expected before the next race in Argentina.

Ducati's rivals believe the primary purpose of the winglet is to generate additional downforce.

Earlier this year, MotoGP technical director Danny Aldridge sent a note to all teams, opening the door for such add-ons to be used in dry races, as previously such a deflector could only be used in the wet to disperse water from around the tyre.

Motorsport.com asked ex-Formula 1 engineers to analyse the Ducati winglet and they believe there is no doubt the winglet creates aerodynamic load.

Ex-Ferrari F1 engineer Toni Cuquerella told Motorsport.com: "It's obvious that Ducati's winglet generates downforce. First of all, because any part that's exposed the way that one is produces it, and it could even help reduce the bike's drag.

"You have to keep in mind also that the effect it creates has a direct impact on the rear end. Since it's attached to the swingarm, the airflow must not be passing though any other part of the bike.

"The problem is that the way the rules are written, you open a Pandora's box because there might be no specific way to ban it."

Cuquerella, now chief engineer of the Mahindra Formula E team, added: "The FIM now faces the need to clarify the situation. It appears obvious that Ducati is ahead of the rest in terms of aerodynamics, and that they were very smart in how they interpreted a void in the rules."

The fact that the stewards in charge of reviewing the protest filed by Aprilia, Suzuki, Honda and KTM decided to refer the case to the MotoGP Court of Appeals was the first sign of the mess that was knocking on the ruling body's door.

"In F1, aerodynamics have had a major impact on the performance of the cars for the past 30 years. In motorcycling, the impact is smaller, so it's normal that FIM is not used to dealing with this kind of cheekiness," said Cuquerella.

"But even in F1 there have recently been cases where a loophole in the regulations allowed a smart team to interpret the rules in such a way that it managed to use something that it was initially banned. We can't forget Brawn GP's double diffuser and Red Bull's blown diffuser."

Last summer, the Grand Prix commission approved a rule - voted against by Ducati - that aimed to stop the teams' from investing in aerodynamics development, in order to slow down the escalating costs associated with it.

However, the fact that Ducati's winglet is attached to the swingarm and is not recognised by the regulations as a part of the bike's aero body, opened the door for the Italian engineers to introduce the device without breaking the rules.

Cuquerella concluded: "When Ducati told MotoGP technical director Danny Aldridge that the main function of the device was not to direct water away from the wheel but to cool the rear tyre down, they managed to get it approved for dry races.

"The FIM will have to rewrite the technical regulations, because what's obvious is that it won't be able to take the bikes, one by one, and put them in a wind tunnel to quantify the amount of downforce that each part generates.

"You can't ban parts that generate downforce if you can't prove that they are generating it. What you can do is specify some dimensions in the rules."

Ducati remains confident that the device is within the regulations and says it would not have installed it had it had any doubts about its legality.

"We are calm because we know that we have followed the technical regulations," sporting director Paolo Ciabatti told Motorsport.com in Qatar.

"There is a note that was distributed among the teams on March 2, which clearly specified how you could use this type of deflector on the back of the bike.

"If we had considered that this element could pose a risk of punishment, we would not have run with it. But it's not like that."