Toni Elias says that Valentino Rossi still hasn't forgiven him for inflicting defeat on the Italian in the 2006 Portuguese Grand Prix, which ultimately cost Rossi that year's MotoGP title.

Estoril played host to the closest finish of the MotoGP era in 2006, as Gresini Honda rider Elias pipped Yamaha man Rossi to the finish by just 0.002 seconds.

The five points Rossi lost in the process would prove crucial two weeks later at Valencia, where the Italian crashed and subsequently lost the title to the late Nicky Hayden by five points.

Had he triumphed at Estoril, Rossi would have clinched a sixth consecutive title on countback, having scored five wins that year to Hayden's two.

Elias, currently representing Suzuki in MotoAmerica having won that title in 2017, believes that Rossi still isn't over the defeat some 14 years on.

"When I met Valentino, and I see him in Austin every year, I could see that he still has it in his heart, he hasn't forgiven me," Elias recently told Spanish TV network DAZN.

"It's over, it's time to be friends, but it's not possible, he's so competitive that he's stuck with it, he'll never forgive me.

"For me it's the opposite, I beat him one day but I considered him the best rider of all time until recently, because right now the best is Marc Marquez, and I think he's going to surpass him". 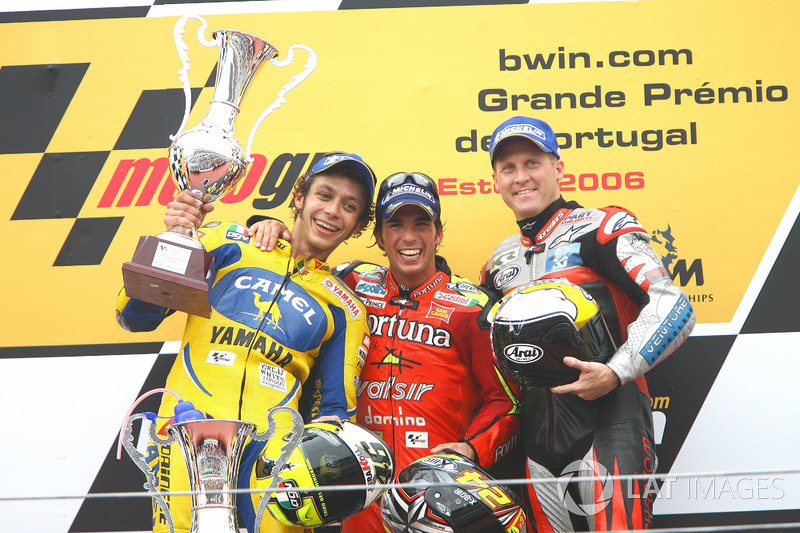 The Estoril race proved to be Elias' one and only victory in MotoGP, as the Gresini squad suffered a decline in fortunes when the championship switched to 800cc bikes in 2007.

He scored a further four podiums - two for Gresini and two for Pramac Ducati - before stepping down to Moto2 and winning the inaugural title in 2010, which was followed by a final, disappointing season in the top class with LCR Honda in 2011.

Recalling the circumstances of his win, Elias said: "Michelin brought us a new tyre for that race on Saturday, I managed to improve my pace by seven tenths and fight for the victory.

"I thanked Michelin for their help, although I was very angry when I found out that this tyre, with a softer carcass, was the one used by the top riders during the whole season, and that they only gave it to us in the penultimate race of the year."

Elias' Estoril win was also the last time a privateer won a race in the premier class until Jack Miller's triumph in the Dutch TT almost 10 years later.

"A satellite rider is never going to win a world championship, it's politics," said Elias. "It's not possible, it doesn't suit the factory sponsors. Even if a factory signs a contract with you and supplies the same material, it will never happen, I have lived it.

Assen has "no worries" about losing 2020 MotoGP race