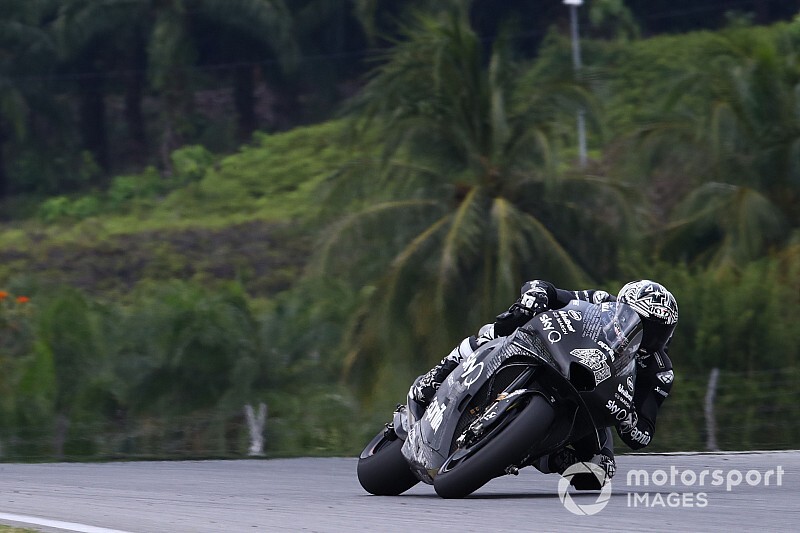 Aleix Espargaro says that his new Aprilia showed podium-contending pace during MotoGP’s Sepang pre-season test, but also warned the bike's reliability is not yet up to par.

The new Aprilia RS-GP showed a big improvement in the hands of Espargaro, who ended the test 10th fastest and just 0.345s slower than the benchmark time.

But a strong long run on the last day was even more eye-catching, and the Spaniard insisted that, in those circumstances, the Aprilia was a podium contender.

However, as his long run was cut short due to an exhaust problem, Espargaro warned that reliability, which has been Aprilia’s Achilles heel for a while, is still something to sort out.

"I was pushing the engineers to try the engine for a long run, they were not very sure, but for me was very important," Espargaro said.

"The race simulation was really good until lap 13, just seven laps to the end. I started to feel that the power dropped a lot and we had a problem with exhaust and I had to stop.

"It’s a shame because I felt very competitive and I felt that I could stay in 1m59s for 20 laps but the bike is very young.

"If the race will be tomorrow here, I think I can fight for the podium, but we will not race here [now].

"We have to go on another track and see what happens, we have to see if the bike can finish the races because every time I stress the bike for more than 10 laps, something is happening. For me the priority is the reliability now."

In relation to his long run, Espargaro said that it has made him "too excited", having showed better pace than the Ducatis and Petronas Yamaha pacesetter Fabio Quartararo.

"Maybe now I am too much motivated, happy and too excited," he said. "The fast lap I put in a difficult circuit like this, because in the first split I lost a lot of time every lap, 2-3 tenths against the Ducatis, even like this I managed to do the strongest 12-14 lap race simulation.

"Better than the Ducatis and what Quartararo did before."

However Espargaro added that acceleration remains a weak point compared to rivals.

"I think the bike is strong in fourth-sixth gear but we are suffering in the low gears," he said. "[On Saturday] I did two laps with Alex Marquez, and there is no way I can overtake him. I almost hit him because there is no way to overtake.

With Andrea Iannone absent, the second Aprilia was shared by Lorenzo Savadori and Bradley Smith for the Sepang test. But neither rider was able to match Espargaro, who noted that having his 2019 teammate present would have been more useful.

"Obviously with Andrea, very strong rider, it is easier because you stress more the material and the problems will come," he admitted. "But we know Andrea's situation and I hope that he can fix it and be in Qatar."