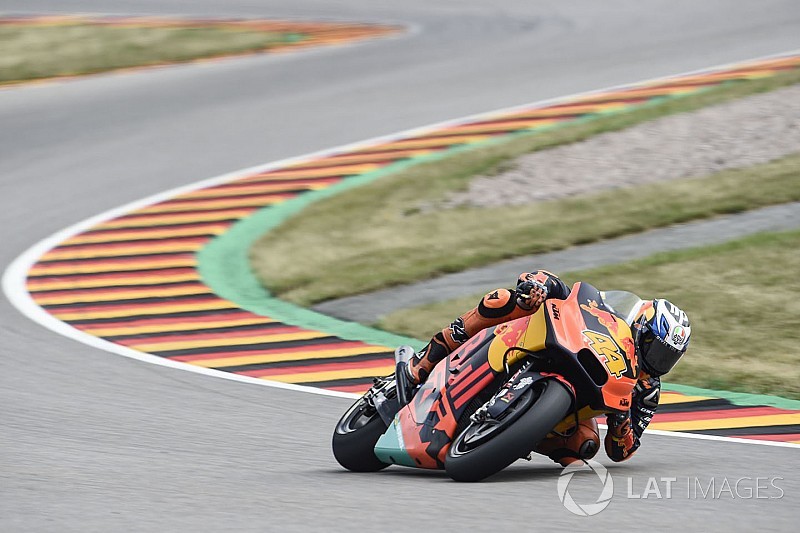 Suzuki MotoGP riders Andrea Iannone and Alex Rins feel Pol Espargaro should have been penalised for causing the start incident that put both of them out of contention of the German Grand Prix.

Espargaro clipped the back of Iannone's Suzuki while running on the inside line of Turn 3, which led to the KTM rider crashing, and collecting Rins in the process.

He was investigated for the incident, but no penalty was awarded.

"I already talked with Davide [Brivio], the boss of the team, and he has been on the race direction and they say no penalty, nothing," said Rins, who revealed that Espargaro apologised after the race.

When asked if he agrees with the decision, he said: "No. Sincerely, no. If we are going like this and the big boys on the race direction don't stop this, finally it will be chaos.

"In the end what happens on first lap, on third corner, was strange. On the second corner, I was on the inside and I saw Pol on the outside, a little bit on the limit.

"When we change direction he was on the kerb on the inside on maximum angle and he touch with Andrea and then he crash."

Iannone, who ran wide as a result and dropped down the order, added that Suzuki's race was a write-off because of Espargaro's riding.

"We lost completely the race because I think Pol Espargaro don't think a lot in these first three corners," recalled Iannone.

"[He] start maybe strong, but it's okay when the rider tries to recover the position, but with intelligence, with [using] the head.

"On Turn 3, we don't have space. He arrive and when change directions, stay on the kerb, completely on the kerb, inside - so, without line, it's unbelievable.

"I've heard the sound of the bike, and I start to pick up a little bit the bike because I expect contact. For this I save my crash, but I lose more than 10 positions. And in this track it's really difficult to recover."

Pramac Ducati's Jack Miller was another victim of the incident, as he had to run through the gravel and lost several positions.

"[Espargaro] came in on the outside like an idiot already at Turn 1, trying to pass me, ran into me, and then tried to pass the three of us round the outside into Turn 2," said Miller.

"So, the crash was coming from a long way away.

"I was lucky enough to avoid it, but running into the gravel, touching the wall and then having to come back through the gravel at the start of the race, a 30-lap race, already 15 seconds behind, it's not the nicest."

The Australian added: "He put his nose underneath me already, I went deep on the brakes into Turn 1, and he came up, put his nose there, sort of touched the back of me into Turn 1.

"He tried to go round the outside of me and about three others in Turn 2. Had nowhere to go, and tried to force his way in to the back of Rins, basically."