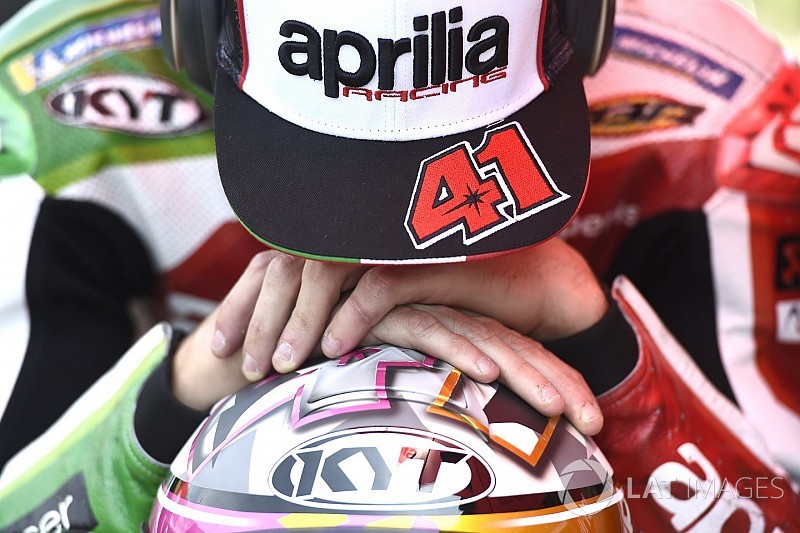 Aleix Espargaro says he was left “very angry” by his poor form in Barcelona, admitting he and the Aprilia MotoGP team are “in a really bad moment of the season”.

Espargaro struggled badly in the build-up to the Catalan Grand Prix, qualifying only 16th and picking up a grid penalty for coasting on the racing line during warm-up.

He crashed out after four laps in the race, recording his fourth retirement of the season, and now sits 18th in the standings, having collected just 13 points from seven races.

“Definitely one of my most difficult weekends of the season,” Espargaro said. “I struggled a lot.

“In the past I have always been very competitive in this track. This year I really don't understand what was going on.

“We missed the setting of the bike, I had no grip at all, especially with the front tyre it was very tricky.

“It felt better in the warm-up and in the race but starting from 19th I had to risk a lot. I overtook six riders in just one lap and a half.

“I was risking and it didn't work. I made a mistake and I crashed.

“We are in a really bad moment of the season. The results are not coming, we got a little bit lost with the settings.”

Espargaro, who took one of his two career MotoGP poles in Barcelona back in 2015 with Suzuki, said he “feels very bad for the team” but stressed that he and Aprilia needed to bounce back urgently.

“The results must arrive as soon as possible,” he said. “I don't remember a weekend like this in Barcelona in the last five years. I was always competitive and this year was a disaster.

“I'm very angry. I want to do a good race and I can't. I'm pushing a lot, I'm crashing, not feeling good.

“We know which is the problem, but I'm a little bit lost about how to improve because in the last races we tried many things and nothing works for the moment.”

The Spaniard's crash in the race was at the Turn 11 left-hander, and he was the only MotoGP rider to fall at that corner during the weekend.

“I made a really bad start. I was 21st but I gained many positions in just one lap and a half," he recalled.

“I felt strong on the brakes and with the throttle, but obviously when you have to overtake a lot you have to risk more than them because you have to brake late.

“Finally I had a small crash in a stupid corner where it never seems possible to crash.”