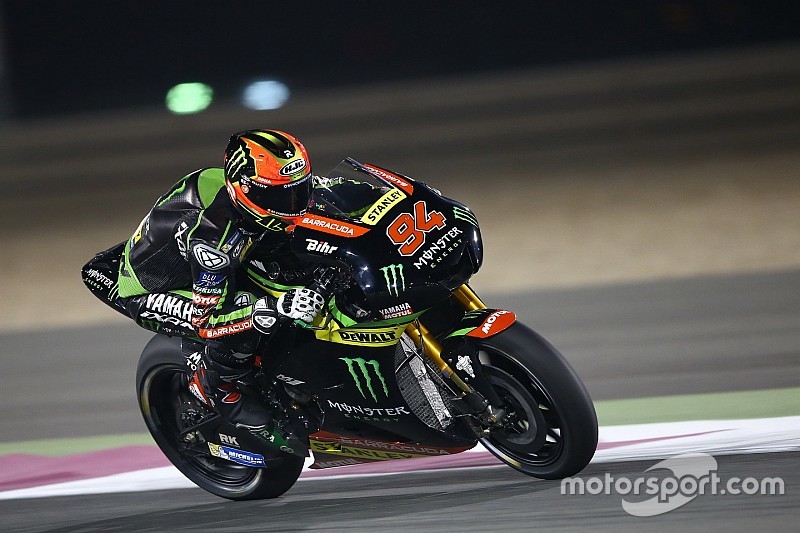 Tech 3 Yamaha rider Jonas Folger says he hopes to finish his first-ever MotoGP race at Qatar in the top 10.

The German rider has been one the surprises of pre-season testing, in particular showing impressive pace aboard the 2016-spec Yamaha M1 at Phillip Island and Qatar.

At the latter test, Folger ended up seventh-fastest on the final day, less than half a second behind factory Yamaha rider Maverick Vinales and four tenths ahead of Valentino Rossi.

The 23-year-old believes this form could translate into a strong debut result at the Losail track, especially as he built confidence on the final day of testing with a solid race simulation.

Asked if he could finish in the top 10 next weekend, Folger replied: "I hope so. I think it's not impossible.

"We'll see what we can do on the race weekend because it's a different story again. But we can be very happy with the preparation we did this winter and we are ready.

"After the crash in Phillip Island I lost some confidence, but I've built up more confidence with the bike, especially in the race simulation.

"So I start to understand the bike a better, especially when the conditions are changing I can adapt quite well now. The tyre dropped quite a lot after eight or nine laps, but then it stayed quite constant."

Zarco keeping "feet on the ground"

Folger's Tech 3 teammate Johann Zarco, who enters MotoGP with two Moto2 titles to his name, slotted between Folger and Rossi in the Yamaha pecking order on the last day of Qatar testing, ending up ninth.

But the Frenchman says he is not getting carried away by the strong form he and his teammate have shown in the winter - even if he admitted his 2016-spec Yamaha has "fantastic" potential.

Asked if he could be the "surprise" of the Qatar weekend, Zarco said: "I don't expect to be a surprise, I just want to do the best of my work and finish happy.

"It's better to be good all year than be a surprise one time, so I just stay very 'feet on the ground' and wait for the race weekend to do a good job.

"The potential of this Yamaha is quite fantastic, and now when I can be close to the top riders it makes me smile and gives me a lot of motivation."

Cadalora: Working for Rossi the realisation of a "dream"

Redding felt like “old self” in Qatar MotoGP test