Folger says Sachsenring star showing will be no one-off 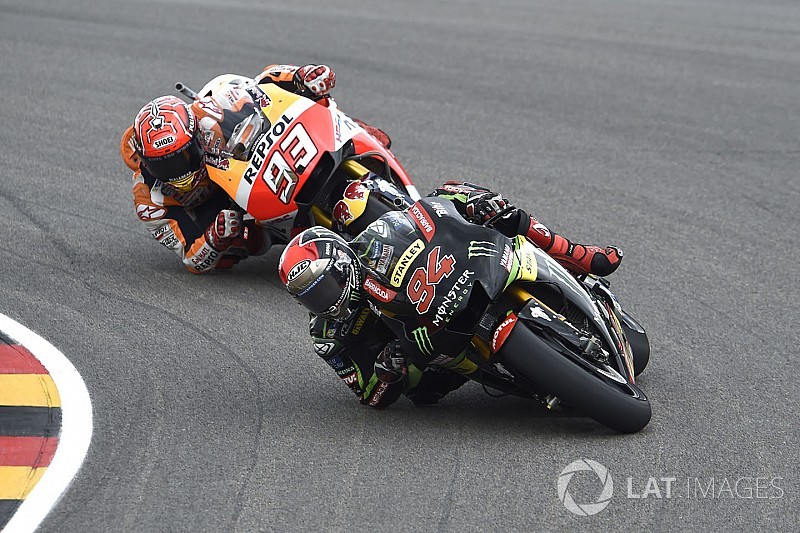 On home turf, Folger pushed Marquez all the way in Sunday's Sachsenring race, enjoying a five-lap spell in the lead and staying within one second of the reigning champion until the final few laps.

He eventually crossed the line three seconds adrift to record the first podium finish of his premier class career, comfortably ahead of Dani Pedrosa.

Folger, who said post-race he believed he had the speed to beat Marquez before his tyres gave up, insists his strong home showing is no flash in the pan, and that there is "more to come".

"I wanted to prove exactly what I did – that I am not only fast in practice and can get one or two good results in the rain," said Folger.

"I [proved] also I can be strong on such a weekend, where I have a lot pressure, at home, that I can stay calm and turn the pressure into something positive, that I can be a strong rider."

"I believe there is a lot more to come."

Folger's second place marks the third time in the last six races that the satellite Tech 3 outfit has beaten the works Yamahas of Valentino and Maverick Vinales, who finished fourth and fifth in Germany.

Both factory riders have been experimenting with new chassis in the last two races, and Folger believes this is a contributing factor in Rossi and Vinales being beaten by himself and teammate Johann Zarco.

"The factory team has problems right now and struggles, I believe on the chassis side," said Folger. "But we are not looking at them.

"They have big concerns, as Johann and I are beating the factory team. But we concentrate on ourselves and try to make the best out of what we've got."

Zarco, who took Tech 3's first podium of the year in his home race at Le Mans, recovered to finish in ninth place in Germany having qualified down in 19th – a week after taking pole position in Assen.

But the Frenchman confessed he would never have been able to match Folger's pace even if he had started as high up the grid as his teammate.

"Even if I started from the second row of the grid, like Jonas, I could not have this pace," Zarco admitted. "I did all my laps in 1m22s, and he did the race in under 22s.

"Maybe it was possible to have fourth or fifth like Vinales and Rossi, because I had their pace, but the podium was not possible for me this weekend.

"I'm really happy for what he did, it's good for him, good for us also, for the team it's fantastic."

KTM should be "really proud" of first MotoGP season so far