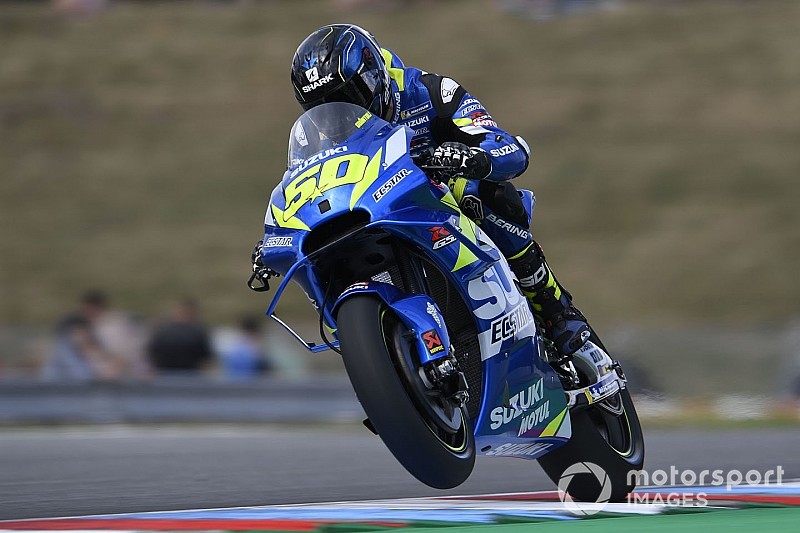 Suzuki has announced Joan Mir will miss this weekend’s British Grand Prix as he continues to recover from chest and lung injuries, and will be replaced by Sylvain Guintoli at Silverstone.

The 2017 Moto3 world champion and premier class rookie suffered a high-speed crash at the first corner at Brno during the post-race test at the Czech track, and had to be taken to hospital where he was diagnosed with contusions to his chest and lungs.

He was forced to miss the Austrian Grand Prix and spent a several days in hospital in Barcelona under the observation of MotoGP’s Dr. Angel Charte.

Though making progress, Mir has not recovered sufficiently enough for this weekend’s race at Silverstone, and will instead aim to return to action a few days later at the Misano test.

“In the end I am not able to be in Silverstone for the next race and it is a real pity, but that’s how things are, and the first priority has to be my health,” said Mir.

“After the accident I spent several weeks resting, first in the hospital and then at home.

“I have started to walk, but after the tests it seems that I am still not 100 percent, so the doctors have determined that it is better to continue with my rehabilitation.

“I will start doing some more training so I can get to the next race in better physical shape and not have to take too many risks.

“I would like to thank the people who are beside me and taking care of me, my Suzuki team for their concern and the thousands of fans who have encouraged me during all these days and who have shown me an enormous affection."

Guintoli hasn’t ridden a MotoGP bike around Silverstone before, but is a race winner at the circuit in the World Superbike Championship.

The 2014 WSBK champion has contested two races already this season as a wildcard, scoring points in 13th in Barcelona, and was 20th at the Czech Grand Prix.

Guintoli is currently testing the GSX-RR in Finland at the new KymiRing, which will host the return of the Finnish Grand Prix next season.

Mir currently sits as second-best rookie in 13th in the standings on 39 points, having taken a best result of sixth at the Catalan Grand Prix.

Ducati will take "quite a long time" to fix turning