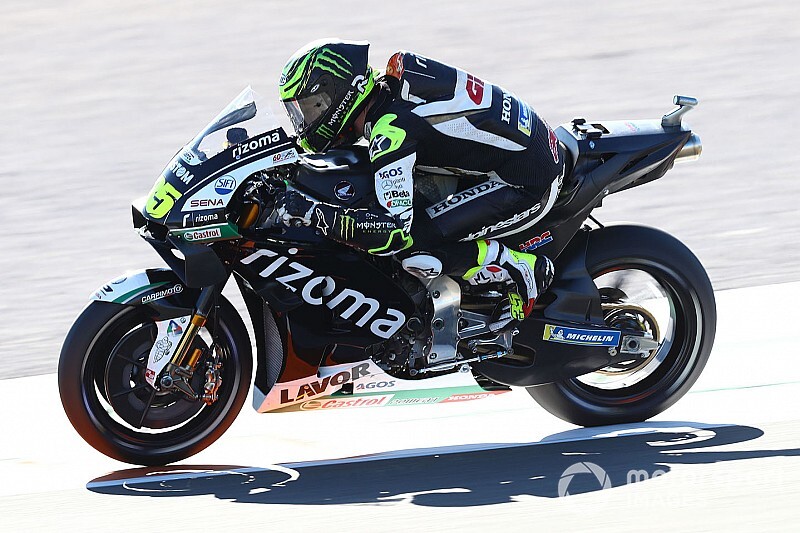 Cal Crutchlow admits the 2020 prototype Honda MotoGP bike he tried in the post-Valencia test this week is no easier to ride than its much-criticised predecessor.

LCR rider Crutchlow was vocal about the 2019-spec RC213V’s difficulty in turning all through this year, having managing only three podiums in 19 races using it.

Having spent the two days in Valencia comparing the ’19 and ’20 bikes, Crutchlow says steps have been made “in some areas”, but the bike is still difficult to ride.

“I feel a little bit more comfortable and confident on the bike, but as far as the bike is concerned with regards to it being easier to ride, it is not. We need to still improve that over the winter and hopefully they can.

“On a general feeling, I managed to go faster than I did all weekend and this has to be a positive thing on a bike that's solely done two days here in Valencia.

“I didn't try my race weekend bike today [Wednesday] particularly. I did one run at the end of the day and I am sure I could have gone faster with that as well, but the information is what we need is the 2020 bike.”

Marc Marquez – who was seventh-fastest at the end of testing - echoed Crutchlow’s comments on the rideability of the ’20 bike.

The six-time premier-class champion said: “The character is more or less similar.

"If you have an easier bike, it will help all the Honda riders. But my goal is to try to have the fastest bike; it doesn’t matter if it’s difficult [to ride] or not."

He added: “I just concentrated a lot with the prototype because I believe that has potential but still everything is very new. Still we need to modify a few things. I did my best laptime with the prototype, and just I kept working with that bike.

“Again, I took the current bike and I was fast too. But still many things are new and lucky for us we are in Valencia. And like this, on the race pace we were not bad.”

Binder was "lost" on KTM before following Pedrosa