How the MotoGP era nearly started with an almighty upset

It's 15 years to the day since the dawn of the MotoGP era, but it nearly started off with a wildcard taking a highly improbable victory. Jamie Klein looks back at when underdog Akira Ryo almost beat Valentino Rossi at Suzuka.

Here’s one for you – who was the last rider to win a Grand Prix motorcycle race as a wildcard entry?

If you’re struggling to think of the answer, it’s because you have to go back a full 15 years to the 2002 season opener at Suzuka, where the 250cc race was won by local rider Osamu Miyazaki.

In fact, that rain-soaked April afternoon in Japan nearly threw up another shock winner in the premier class, as Suzuki wildcard Akira Ryo came close to pulling off the upset of the decade, leading for 15 of the 21 laps - but he fell just short of beating then-reigning champion Valentino Rossi’s Honda.

It’s exactly 15 years to the day since Ryo finished a close second to Rossi – still a phenomenal achievement for a 36-year-old All-Japan Superbike regular against the man who would go on to be modern Grand Prix racing’s most successful competitor ever.

That race also holds the distinction of being the first of the MotoGP era, as the sport’s manufacturers introduced a new breed of 990cc four-strokes to take on – and ultimately replace – the 500cc two-strokes that had dominated since the late 1970s.

The field for that first-ever MotoGP race at Suzuka comprised 21 bikes – nine four-strokes (three Hondas, three Suzukis, two Yamahas and a lone Aprilia) against a dozen of the old two-strokes (mainly satellite Hondas and Yamahas, but also a pair of three-cylinder Proton KRs).

Qualifying was held in the dry, and while Pons Honda man Loris Capirossi managed to put his West-backed NSR500 second just behind Rossi’s four-stroke RC211V, the rest of the top five were all on 990s. The writing for the old two-strokes already seemed to be on the wall.

Ryo had put his Dunlop-shod Suzuki a creditable seventh, comfortably clear of works riders Kenny Roberts Jr and Sete Gibernau, but better was to come when the lights went out on Sunday. 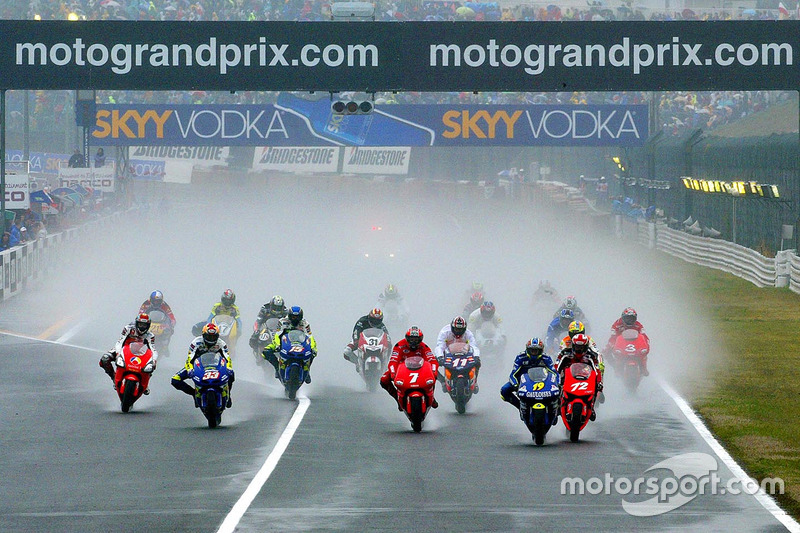 When the race got under way, it was Olivier Jacque, riding the two-stroke Tech 3 Yamaha, who made the best getaway of all to lead the pack into Turn 1, although it soon transpired that the former 250cc champion had jumped the start from his eighth-place grid slot.

Still, the Frenchman soon slipped back to third in the treacherous conditions, with Ryo storming through from seventh to second before taking the lead from another local ace – Honda development rider Shinichi Itoh, riding a third HRC-entered RC211V – later on the opening lap.

And so, fans were treated to the rather bizarre spectacle of Ryo leading the first lap of motorcycle racing’s new era, followed by fellow wildcard Itoh, Jacque, Carlos Checa’s works 990 Yamaha and Rossi.

While it was the two wildcards setting the pace up front, using their intimate knowledge of the Suzuka track to the best possible effect, Rossi was soon on the move. He picked off Checa at the final chicane on the second lap before repeating the move on Jacque, still to pit to serve his stop-and-go penalty for jumping the gun, two laps later. 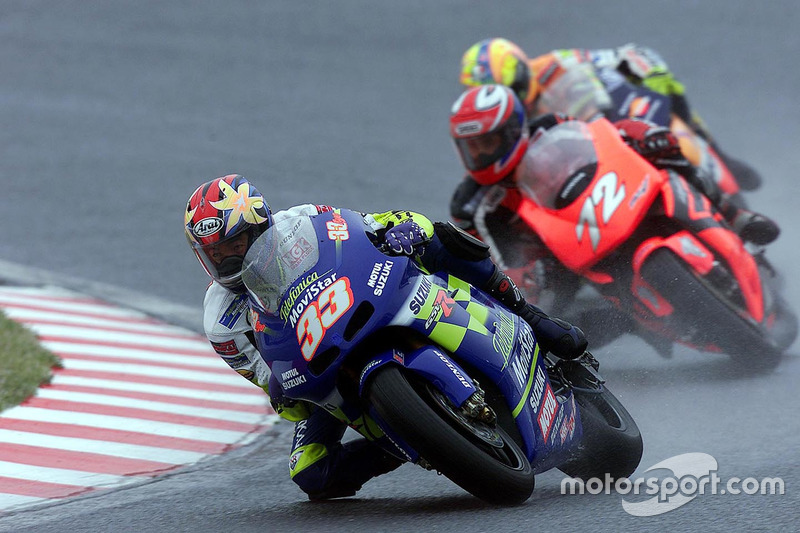 It wasn’t until the eighth lap of 21 that Rossi was able to dispatch Itoh and move into second, again outbraking his rival into the final chicane, and begin to make inroads into Ryo’s 1.3-second advantage.

Rossi quickly eliminated the deficit, but took his time to go for the pass, as he studied Ryo’s lines, working out where the Japanese rider was stronger and using that knowledge to up his own pace. The inevitable winning move came on lap 16 at the Italian’s preferred passing spot.

Ryo put up a brave defence after that, shadowing Rossi all the way home, but in the end the Suzuki man missed out what would have been the victory of his career by a scant 1.550s. Little did the team realise at the time, but its wildcard had delivered what would be Suzuki’s best result of 2002.

“I’m very satisfied, but I’m sure the team wanted to win this race,” said Ryo afterwards. “For the last lap I tried to overtake Rossi again but I was about to lose balance, so I just kept myself where I was.

“Anyway, I’m very delighted to have raced with Rossi, the world champion.” 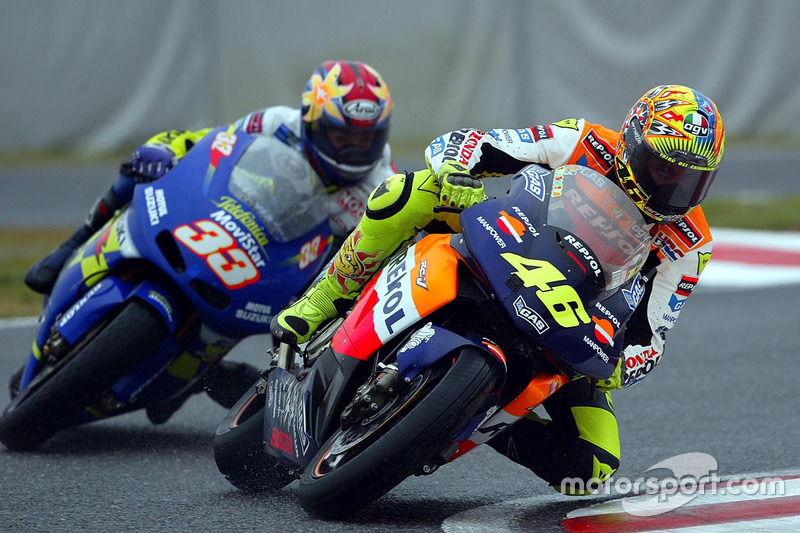 For Rossi, the prevailing feeling was one of relief – as the overwhelming pre-season favourite, he was expected to get the job done, with Capirossi even joking his compatriot would be able to win with “one arm tied behind his back.”

But, despite having qualified on pole, the 23-year-old seemed uncertain whether he would stand a chance in the wet after a dismal showing in morning warm-up.

“It's a special moment for sure because it's the first race of this new series,” said Rossi, who became the first rider since Giacomo Agostini in 1976 to win using a four-stroke bike in the premier class.

“And also this victory is more important than normal for me, because on Friday and Saturday we crash and we knew exactly our potential in dry conditions – but in wet conditions we didn’t know.

“This morning in warm-up I was 14th place, so I didn’t know if it was possible to fight for the podium in the race.” 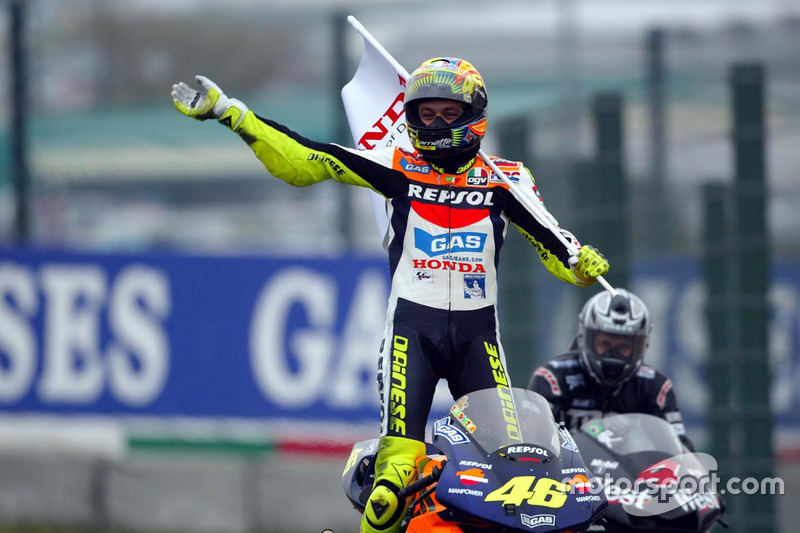 Checa claimed the final spot on the podium, having got the better of a fading Itoh late on in the fight for third, with Norick Abe the best of the two-stroke finishers in a distant fifth for the d’Antin Yamaha squad – 20 seconds behind Rossi.

A dominant Rossi went on to add a further 10 victories during the remainder of 2002, defending his title by a bigger margin (140 points) than he had first clinched it with the previous year, with arch-rival Max Biaggi once again his nearest challenger on the works Yamaha.

All 16 races that year were won by four-stroke riders – Pons rider Alex Barros was upgraded from a two-stroke NSR500 to a RC211V with four races to go, and promptly won two of them – and by the middle of the following season, the 500cc machines were all but extinct as Ducati and Kawasaki joined the party with their own 990cc prototypes.

The MotoGP era was in full swing – but it nearly started with one of the sport’s all-time biggest upsets. 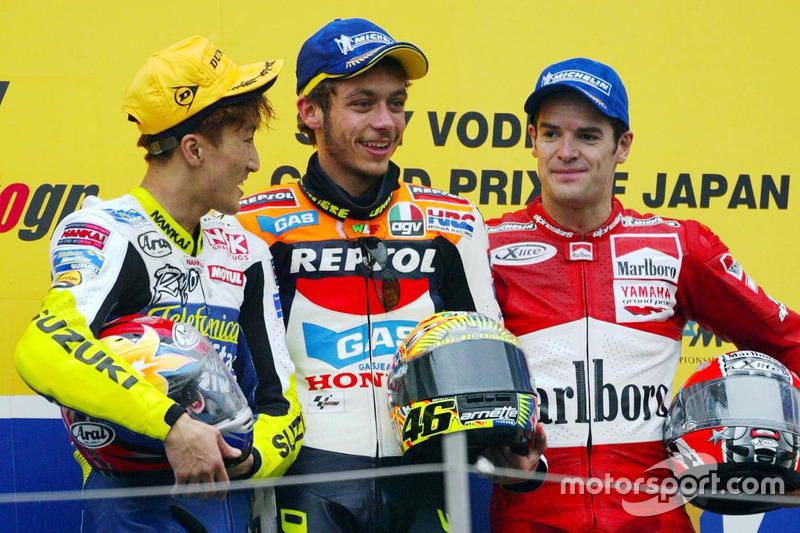