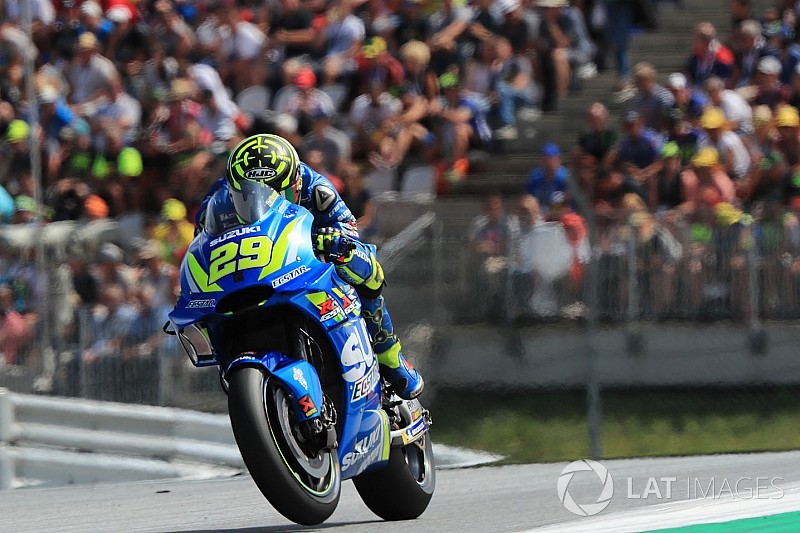 Andrea Iannone has hit out his Suzuki MotoGP team for what he perceives as preferential treatment towards Alex Rins.

Iannone, who is switching from Suzuki to Aprilia next season, criticised the Hamamatsu marque over the fact he and teammate Rins are running two different variants of chassis at the Red Bull Ring this weekend.

Rins is utilising a new frame he sampled post-race testing at Brno, which was not originally intended to be used in Austria and that Iannone has not yet had chance to try.

After qualifying eighth at the Red Bull Ring, two places ahead of Rins but eight tenths behind poleman Marc Marquez, Iannone could not hide his frustration at the situation.

"We have a bike with many limits that are very evident here,” lamented Iannone. “In the second part of the championship we hoped to improve those limits, but nothing.

"It's not that I expected a lot. But there is a chassis evolution that Alex Rins is using and I am not.

“I believe that when you are a factory rider, you try to work as professionally as possible, and you hope to have the parts that make the bike faster.

"My motivation is not lacking, but it is not in my hands anymore. Two years ago I set the record for the [Red Bull Ring] track with pole and now I’m a second slower.”

Suzuki team boss Davide Brivio responded to Iannone’s comments by saying that the chassis case was a “special one” and that the team endeavours to treat its two riders equally.

"The support is the same for the two riders," said Brivio. "If we talk about professionalism, it's hard to say that Suzuki does not behave professionally.

“Everything that is available and can give us an advantage will be available to the two riders.

"Andrea complained in Brno that he did not have the [new] fairing, but he had it, he fell [during the post-race test] and it broke. Then Rins discarded it and we did not homologate it.

"The case of the chassis is special, it was only [planned] to do the Brno test and send it to Japan. We only have one.

“We will try it again in a new test, but at the moment we did not think it was a big step, that's why we have not produced more.”