Iannone facing "biggest challenge of my life" at Aprilia

MotoGP rider Andrea Iannone says his aim to make Aprilia into a leading grand prix racing team is “the biggest challenge of my life”.

A grand prix winner with Ducati, Iannone joined Aprilia on a two-year deal for 2019 after being replaced at Suzuki by Joan Mir at the end of last season.

The Noale firm has struggled to keep up with other MotoGP manufacturers so far this season, and Iannone himself has been regularly outperformed by Aleix Espargaro.

Asked ahead of the Red Bull Ring race which aspects of its RS-GP bike Aprilia needs to improve, Iannone said: “Depends a lot about the track.

"We have a lot ups and downs - in Assen the bike not so bad, so we [were] missing something, but in any case in Brno was a complete disaster, really difficult to manage the situation, we lose in every area, in braking, in the corner speed, on acceleration, on engine.

“When we have a completely flat track, without bumps, and really high level of grip, we [can] fight from 10th position to 12th, 13th, like this. Sometimes something more.

“In any case I believe in Aprilia, because [of] the history. But for sure I think it's a really big challenge, I think the biggest challenge of my life. And I hope I win also this challenge, but at the moment it's really difficult.”

Iannone has edged closer to Espargaro as the season has progressed, and said he has benefitted from his crew chief Fabrizio Cecchini and the rest of his Aprilia crew building up experience in MotoGP – with Cecchini having operated in Moto3 the years prior.

Espargaro is several kilograms lighter than Iannone, which the Italian also believes has contributed to the gap between the pair.

“More or less in every race, also compared to Aleix, I lose a lot on the top speed, I lose something on the acceleration point, also when I want to fight with my teammate, I struggle a lot," he said.

“For us the two bikes are completely same, but on the data are different, no? I don't know, we try to understand this situation but half championship maybe I lose a lot on the aerodynamic [side], but it's first time in my life.

“I lose eight kilograms to recover this gap, and I have not recovered the gap. In any case, when I arrive in front of Aleix, I make more than twice the [required] job.”

Iannone, who turned 30 on Friday, says he remains set on returning to the front in MotoGP, and admits this could yet be with another manufacturer should Aprilia not reach the desired level during his current contract.

“I stay here and I want to arrive on the top. I’d prefer [it to be] with Aprilia for sure - after two-three years [it could be] without Aprilia, but my target is always the same.

“I now stay with Aprilia and I try and I make my 100 percent with this manufacturer, with these guys. But in any case I try to find another way, in case with Aprilia it is impossible.” 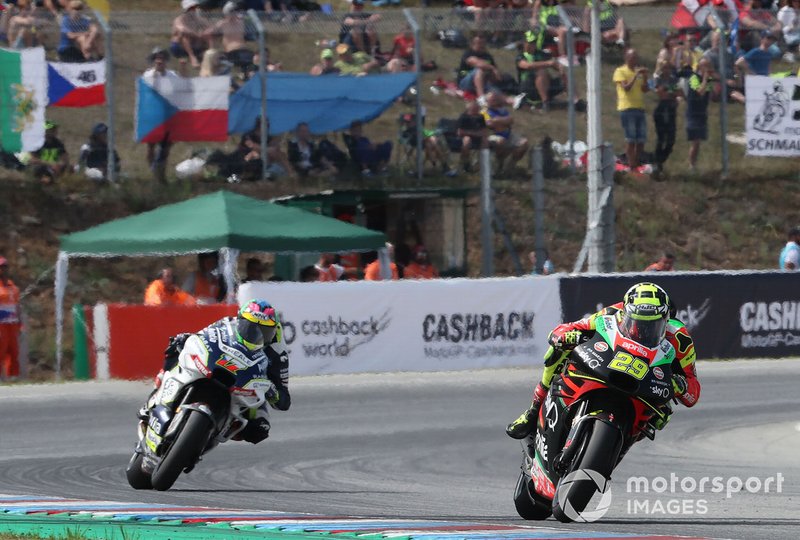