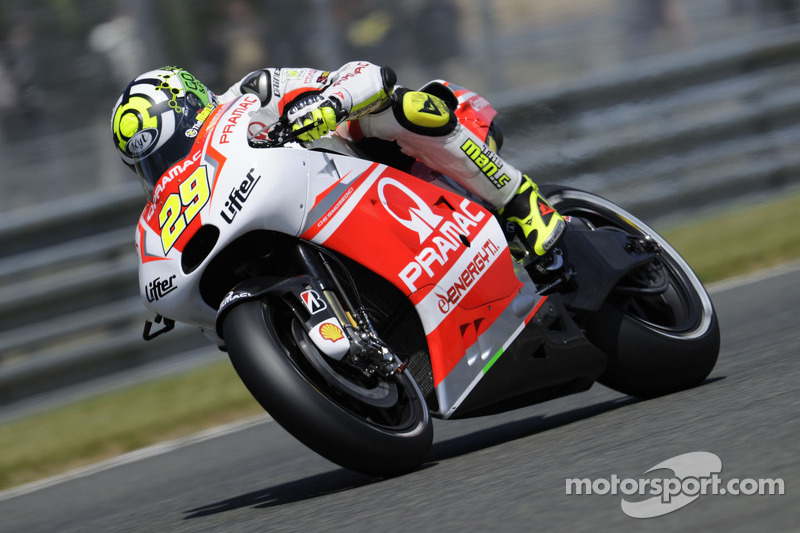 This morning, the MotoGP riders, got on the track with the asphalt slightly wet because of the thunderstorm that hit Montmelo’ during the night. Pramac Racing Team riders, faced both a good race, taking home good results for the championship.

Andrea Iannone (# 29) at the start of the race, immediately gained some positions. The setup used for the race, allowed him to improve his pace, keeping for all twenty-five laps a good rhythm that brought him colse up to the duo in front of him but without being able to overtake them. It 'been a tough weekend for Andrew and his team, but a good conduct of the race and the data acquired makes them look ahead with optimism.

This weekend concludes with Yonny in eleventh position, with the seventh consecutive race finished in the points and the twelfth place in the overall standings. The track also displace Yonny Hernandez (# 68), which in this weekend has been consistently in the top ten. The EnergyT.I. rider in the early stages of the race struggles to find a good race pace, but once he finds it he manages to maintain it until the checkered flag.

Andrea Iannone (Pramac Racing): "I'm happy with how this race finished. The weekend was not easy because we constantly had problems to find the right setup to improve the grip. Despite the all the efforts we have improved a little, but the important thing is that we had a good race and that i was consistent from start to finish, even though we used a soft tire. I went very close to Pol and Dovi because I had a good race strategy. We satisfied, we're growing! "

Yonny Hernandez (EnergyT.I. Pramac Racing): "It was a very difficult race because of the lower track temperature compared to the previous days. The track was very slippery and much slower. I made a good start but I braked too early at the first corner, I pushed hard on the first lap, but unfortunately I made a mistake losing some positions. Once I found the rhythm I did my race, I found myself often alone but i was able to keep a good pace. This was the best weekend since the beginning of the season, I gained even the twelfth position in the championship standings and I want to thank once again the team for their support. "