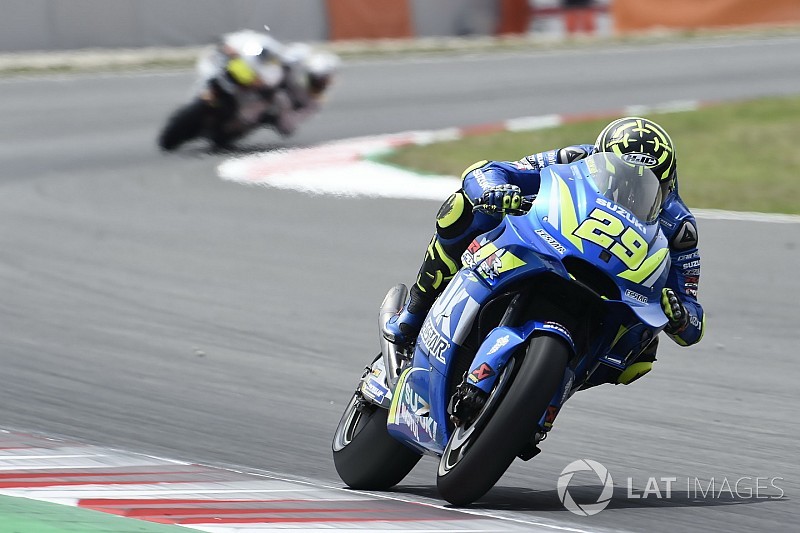 Suzuki endured a torrid 2017 season as it fielded a brand new line-up of Iannone and Alex Rins.

However, the Hamamatsu outfit made clear improvements in 2018, having already claimed three podiums  - with Iannone consistently among the fastest riders.

But after the Barcelona race, where Iannone had his worst finish of the season yet, the Aprilia-bound rider complained about the GSX-RR bike's shortcomings.

He added that he feels he could fight with "the first three riders" if not for Suzuki's weak points.

"I always talk about the drop of the tyres, I talk also with the engineers of Suzuki, I talk about electronics," said Iannone.

"We do not maintain the tyres on the good level, after three-four laps we have a big drop and the bike go completely slide, spins a lot.

"I talk every day about this but at the end it is like this, nothing changes at the moment.

"[It is frustrating] because I think I am a really strong rider, possible fight with the first three riders at the moment. But in any case not possible. I need a good support from my bike."

He stressed that Suzuki had made major progress since 2017, but that it was yet to improve on "very important points".

"[I am not] happy for sure because I spend all my energy," said Iannone, having struggled with shoulder pain during the race. "And I got only 10th position.

"For me, it is normal because I use this bike from last year and we improve, yes, for sure in some points, but we don't improve in very important points.

"Especially electronics side, rear grip. In any case we don't accelerate well, the bike slides and spins a lot, and this is really difficult to manage, especially when we have the hot temperature."

His teammate Rins, who retired due to a mechanical problem, said his biggest issue during the weekend was a lack of one-lap pace.

"When I start to open the throttle looks like no power delivery and I prefer to entry on box before break the engine," explained Rins, who quailified 15th to Iannone's fifth. "I was opening the throttle and nothing happening.

"We need to improve the negative points because this weekend I was not able to do a fast lap.

"The rhythm was not so bad for be on the top five, top seven, but when we put new tyres I was doing the same laptime."

Rossi: Yamaha stuck with "the same bike" until Brno