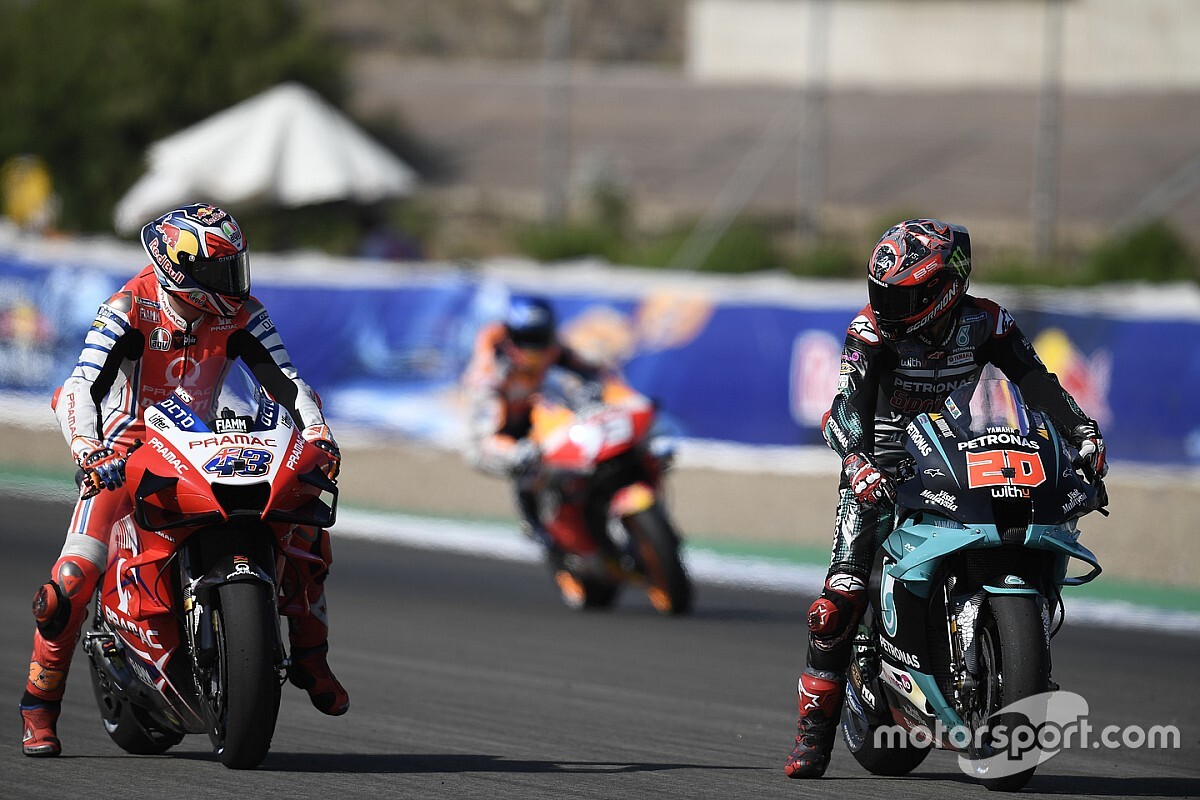 Jack Miller believes Marc Marquez’s injury and withdrawal from the Andalusian Grand Prix means he is now a contender for this year’s MotoGP title.

Reigning world champion Marquez pulled out of the remainder of this weekend’s event after experiencing weakness in his broken right arm after riding in practice and qualifying on Saturday.

The non-score in last weekend’s Spanish GP owing to his crash, coupled with his non-start in Sunday’s Jerez race, means Marquez will be at a serious disadvantage upon his hopeful return at Brno at the start of August.

Pramac Ducati rider Miller ended last Sunday’s race fourth, having run in the podium places for almost all of the 25 laps, and now believes with circuits better suited to him and the Ducati coming up next that he is a championship contender.

“Definitely it’s changed,” the one-time MotoGP race winner said when asked if Marquez’s situation has altered his view on his title hopes. “As it sits at the minute, we’re in this thing. So, we need to change our strategy, we’ve just got to get through this round itself, Jerez 1 and 2, get through these with as many points as possible.

“We’re coming to tracks that I really do well at and we’ll be able to challenge. And here’s a track where Marc normally goes well at and he won’t be able to take advantage, so I think [I need to] just try and get some points up on him. Coming to some other tracks with another year’s experience, the GP20 bike is going better again.

“So, it definitely has changed my outlook on this championship. I was looking for some podiums, hopefully a top five position in the championship, but now… We’ll take it race by race, it’s still very early. But, for sure, I kind of do believe I can be a contender in this thing.”

Miller, who will step up to the factory Ducati team next season, believes Marquez’s efforts to race “deserve a medal of bravery” but questioned if it was the right decision for him to try and come back this weekend.

“Don’t get me wrong, it was amazing to see him out there doing laps,” said Miller, who will start Sunday’s race from seventh. “That alone deserves a medal of bravery, but I don’t think it was… I guess you don’t know until you try, I understand that completely.

“But I think he’d have been better off sitting at home back in Barcelona getting himself fit for the next race. Coming here, it’s so close to an operation it’s mind blowing.

“A massive congratulations to him, like I said, he deserves a Medal of Honour [for] getting his leathers on let alone actually doing some laps in anger.”

MotoGP on TV today – How can I watch the Andalusian Grand Prix?

Racing Point summoned over use of brake ducts

70th Anniversary GP as it happened