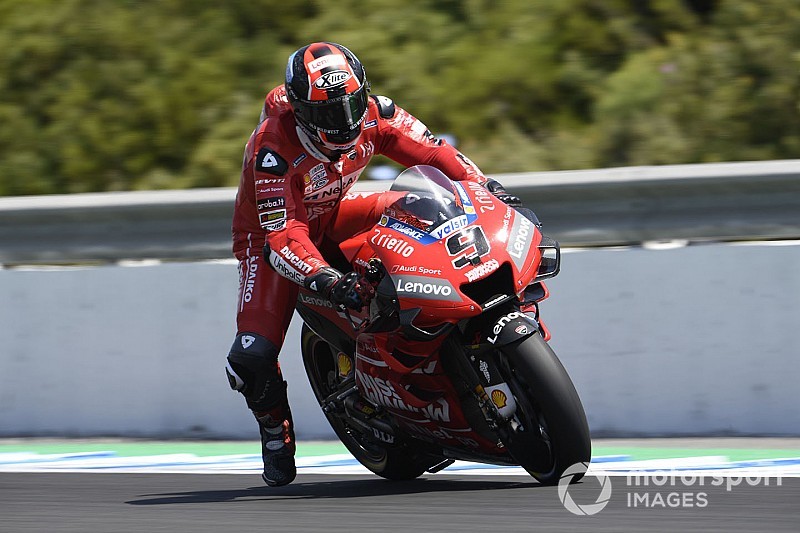 Ducati rider Danilo Petrucci set the pace in a frantic third MotoGP practice of the Spanish Grand Prix weekend at Jerez, as the works Yamaha bikes were consigned to Q1.

As many as 16 riders were quicker than Petrucci's own benchmark from Friday, meaning that automatic Q2 spots were decided on FP3 alone – and in the end it was the factory M1s who missed out, with Valentino Rossi 11th and Maverick Vinales 15th.

Recent-first time winner Alex Rins had begun the day outside of the combined classification top 10, having not ran the soft rear tyre at all on Friday, but immediately shot up the order once he put it on for his first run in FP3.

He followed Jorge Lorenzo around the track to an initial 1m38.553s and then a 1m37.840s, subsequently ending his run with a minor on-track spat with Lorenzo, as he appeared to indicate the Honda man was going needlessly slow on the racing line.

The reigning champion's time was challenged by fellow Honda rider Cal Crutchlow as the session approached halfway, but Crutchlow rolled out of his first proper attempt and then crashed at speed at the Turn 10 right-hander, his RC213V cartwheeling through the gravel and bouncing off the air fence.

The need to redeploy the air fence ultimately forced a red-flag stoppage, although the session had carried on for another eight minutes following Crutchlow's crash before it was suspended.

Soon after the restart, Lorenzo equipped a new soft rear to claim the top spot, only to be immediately surpassed by Petronas SRT Yamaha rookie Fabio Quartararo, going 0.001s quicker.

Takaaki Nakagami and Petrucci then took turns out front, both going below Crutchlow's previous all-time Jerez MotoGP lap record, before Quartararo swiftly reclaimed the top spot with a 1m37.485s, keeping the lead until Rossi went a tenth quicker with three minutes left on the clock.

By that point, Marquez had finally equipped a soft rear, going top by nearly four tenths and then being immediately eclipsed by Danilo Petrucci.

The Italian's 1m36m957s effort – the first-ever sub-1m37s MotoGP lap at Jerez – finally allowed him to end the session in first place, beating Marquez by 0.061s.

Quartararo had been shuffled down to as low as 11th in the closing stages, but secured a Q2 berth by snatching third place at the death.

Crutchlow advanced to Q2 despite his mid-session crash, as did his teammate Nakagami, the Japanese rider narrowly beating the Brit to seventh place.

Franco Morbidelli took ninth on the SRT Yamaha, while Lorenzo narrowly held on to the final automatic Q2 spot, beating Rossi and Pramac Ducati's Jack Miller by four and five hundredths of a second respectively.

Pol Espargaro was the lead KTM in 12th, while his brother Aleix led Aprilia's efforts in 13th, both going faster than the lap record that had stood pre-FP3.

Jerez MotoGP - qualifying as it happened