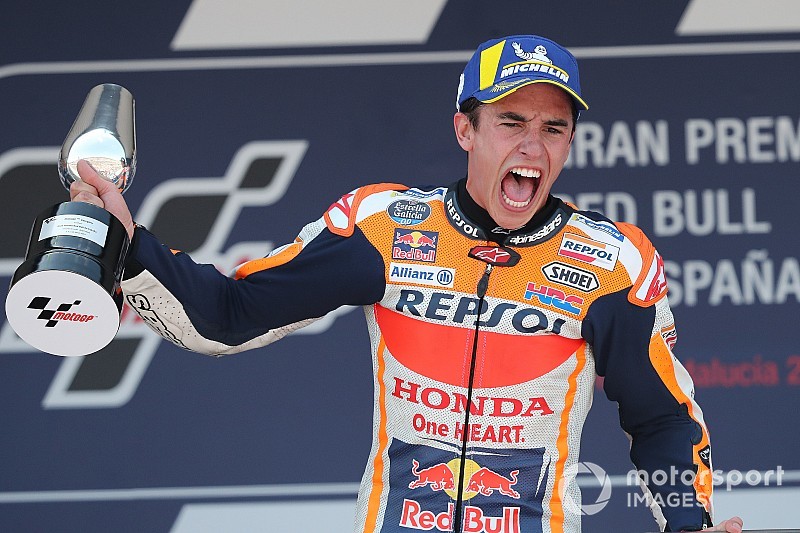 Marquez grabbed the lead off the line and swiftly escaped from the chasing pack, his job made easier when rookie Fabio Quartararo – who had succeeded him as MotoGP's youngest-ever poleman on Sunday – retired out of second place with a mechanical issue.

Having locked out the top two in qualifying, the Petronas Yamaha riders were immediately passed by Marquez off the line – and looked set to drop behind Andrea Dovizioso too, only for the Italian to be forced wide exiting Turn 1.

This left Marquez leading Franco Morbidelli and teammate Quartararo, and while the Honda rider towed the Petronas pair along over the opening few laps, he soon began to make a break.

All of a sudden, the Spaniard was a second and a half clear, with Morbidelli's pace dropping dramatically behind him but the Italian still managing to keep Quartararo at bay.

The Frenchman finally found a pay past on lap 11, overtaking Morbidelli as the latter ran wide into the recently-renamed Pedrosa corner.

Unlike Morbidelli, Quartararo could still just about keep pace with Marquez, which allowed the Frenchman to hold a clear second place, only for his Yamaha to get stuck in gear on lap 14, ruling the rookie out of podium contention.

By that point, Suzuki rider Alex Rins had charged through from ninth place, gaining three places right away before picking off Dovizioso and then Maverick Vinales to come up on Morbidelli.

Just as Quartararo's bike expired, Rins found a way past Morbidelli for what was now second place – but by then Marquez was already almost four seconds clear.

The status quo held between the pair for the rest of the race, and Marquez beat Rins to the finish line by 1.654s, having eased off dramatically towards the very end.

The win allowed Marquez to move into the lead of the championship, aided by Dovizioso finishing only fourth, the Ducati rider unable to find a way past Vinales and deny the Yamaha man his first podium of the season in the closing laps.

Valentino Rossi, who had started 13th, spent much of the race stuck behind Jack Miller, but made speedy progress once he'd cleared the Pramac Ducati rider and eventually claimed sixth.

Miller would later crash out from the race, colliding with the Aprilia of Aleix Espargaro – who went on to finish 11th – as they scrapped for position at the hairpin-like Turn 13.

Morbidelli managed to arrest his slide down the order to finish seventh, ahead of LCR Honda pair Cal Crutchlow and Takaaki Nakagami.

Honda wildcard Stefan Bradl made up the top 10, while Marquez's regular teammate Jorge Lorenzo could do no better than 12th, having to battle for the spot with the leading KTM of Pol Espargaro.

Rookies Joan Mir (Suzuki) and Francesco Bagnaia (Pramac Ducati) joined Miller in crashing out of the race, while Andrea Iannone (Aprilia) did not take the start after injuring himself on Saturday.

The Jerez MotoGP race as it happened

Marquez: Manner of Jerez win a statement to MotoGP rivals