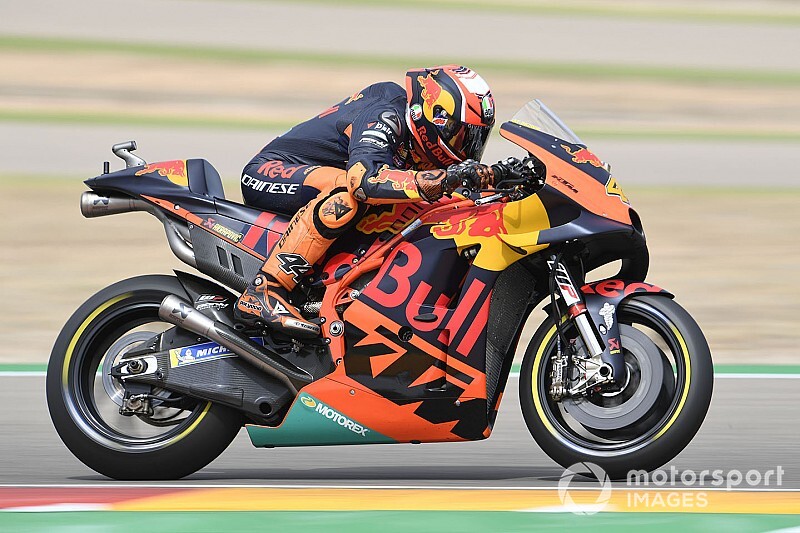 Espargaro crashed during FP4 at Aragon and missed qualifying, as well as the race, as he travelled to Barcelona to undergo surgery.

In his absence, KTM only scored three points at Aragon courtesy of Miguel Oliveira.

Two weeks after his accident, Espargaro was declared fit to ride at Thailand.

"It’s been a very long week at home for me, training and getting ready with this injury here," said Espargaro.

"It was my main target to race here in Thailand, but the hours of physical therapy, cryotherapy, magnetic therapy, lasers, I have done it with all the machines possible.

"I was like 24 hours rehab; when I was sleeping I was using the magnetic therapy. So I couldn’t do more at home."

Espargaro revealed that he has 14 stitches from the operation, and that he insisted on riding at Thailand to develop the KTM, even if sitting out would have been a safer option.

"I have 14 stitches, so they have opened it quite a lot and they have put a plate on. The plate is quite big as well, but it was the only way to fix the injury," he added.

"The fracture was clean, it was not with movement, so it was very clean and nice. Anyway, to be here so fast I had to put a plate in.

"I didn’t want to rest at home even if maybe it was better for my injury. But I want to race, I want to continue developing the bike and continue helping KTM."

With five races to go, Espargaro is 11th in the standings, having already collected 26 more points than last year.

Why perceptions of Morbidelli are 'distorted'