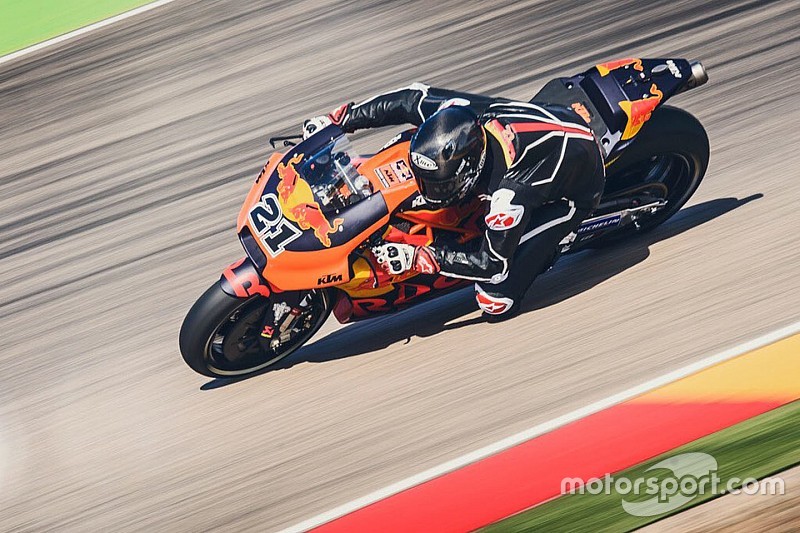 KTM has handed superbike racer Markus Reiterberger his first run on a MotoGP bike as part of its private test at Motorland Aragon.

Reiterberger, who last month wrapped up the title in German series IDM Superbike for BMW, sampled the KTM RC16 on the first day of KTM's two-day test.

“I want to first say 'thank you' to KTM for making it happen, and also to BMW for saying that it's okay, I can test,” Reiterberger said.

“It's a really nice experience for me. I come here, afternoon I get the possibility to get the first time on the bike. The first few laps were an unbelievable feeling.

“In the evening I had about six-seven outings, and I can always improve a little bit for the feeling, for laptime.”

Reiterberger's grand prix racing experience is limited to just a sole Moto2 start back in 2012, but the German did since contest World Superbikes with Althea BMW for a year and a half – before relinquishing his full-time ride in the series as he struggled to recover from injuries.

The 23-year-old German rider has won 11 races in 12 IDM starts this year, securing his third title in the national championship with two rounds to spare.

“In the end, I'm quite happy,” Reiterberger continued in regards to the test.

“For sure, there is a lot of space [to improve] but after half a day, I'm really happy to test this MotoGP bike, and we'll see for my future, if it's helpful for me.”

Ducati "did not lose the championship" at Aragon - Dall'Igna