© 2021 Motorsport Network. All rights reserved.
TV Buy tickets Store
Previous / Rossi has no Monza Rally plans but hasn’t ruled it out Next / Did a ‘useless’ Friday reveal the mindset of a MotoGP title contender?
MotoGP / French GP / Breaking news

KTM unveiled its version of the holeshot start device, which Ducati first introduced into MotoGP in 2018, during Friday’s practice for the French Grand Prix. 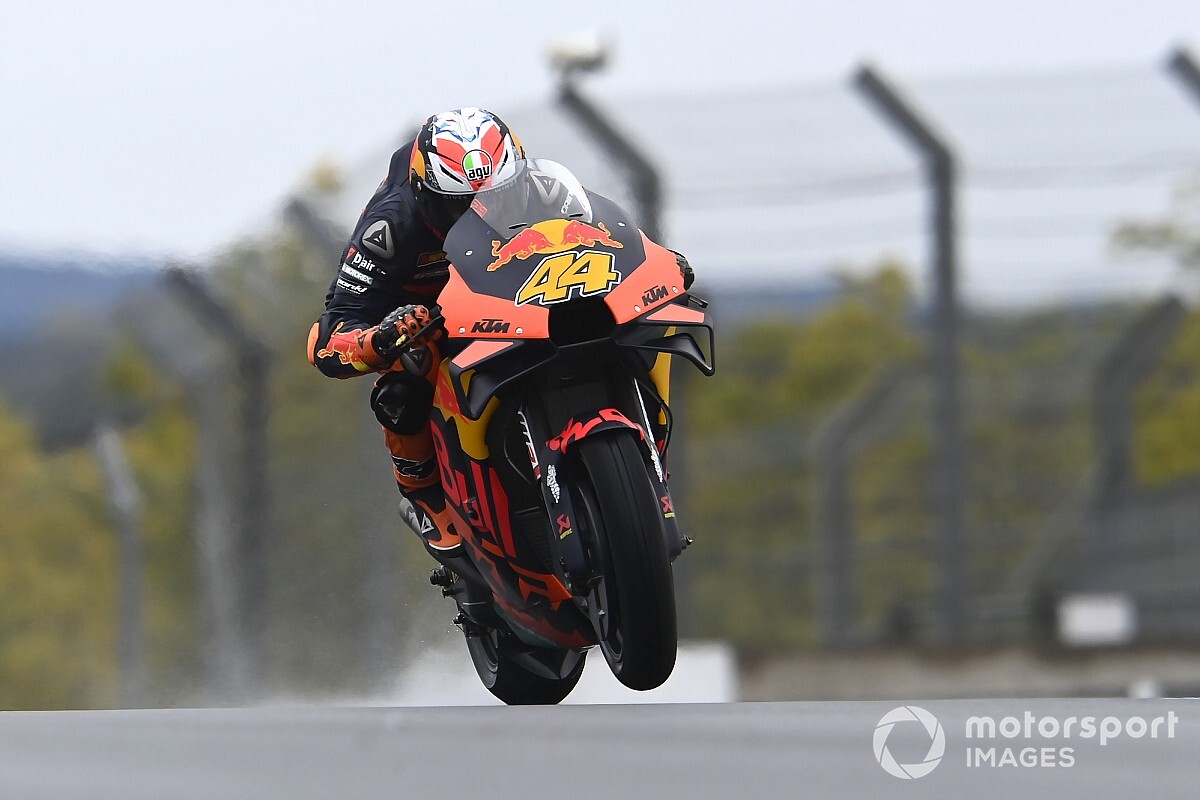 The holeshot device mechanically lowers the rear of the bike to lower the centre of gravity, which allows the rider to launch off the line better without the front of their bike lifting into the air under acceleration.

Ducati debuted it on its Pramac bikes in 2018 and further developed the system for this year as so its riders can lower the rear of the Desmosedici during a lap. All of the other manufacturers bar KTM have a similar system on their bikes for the start (though Aprilia’s lowers the front of the bike) and some have been trying to implement the ‘active holeshot’ system Ducati is now using.

KTM trialled its own holeshot system in Friday at Le Mans, though it is unclear if any of its riders will use it for the race.

“I think we were the only ones not using it, and now we put it on here,” said Pol Espargaro. “Dani [Pedrosa] was testing it at Portimao and it was OK, but we need more info and more starts.  We just did a start this morning and a start this afternoon, one when it was wet and the other in the dry.

“We need more info and more experience with it, but it looks OK. We don’t know yet [if we will race it]. We need to do more starts and be really sure that it works and it’s not going to affect us in the first corner, which is very fast, and we don’t want problems.”

Brad Binder only managed one start with the device on Friday as he crashed at the end of FP2, but felt the system was “quite cool”.

“I did try a start this morning,” said Binder. “We did plan to try one this afternoon but we never made it to the end, so I didn’t really get a chance to test it out. But, yeah, the thing feels quite cool, so far so good.

“So we just need more time to try it out and see how everything works.”

Tech3’s Miguel Oliveira also tested the system, but feels it needs more work as the way it disengages under braking “seems to be quite defective”.

“The holeshot device is still something we are trying to understand with the factory what to do,” said Oliveira. “It’s not so easy to do a holeshot device because we need the bike lower for the start, it seems to be quite defective. But at the same time we need to have the same [normal riding] position back when we brake.

“So, it is something that is still under construction. Le Mans is quite a particular track even if we have a big gap to the first corner. We have a very fast right corner where we don’t brake so much. For sure the bike not coming back to the same position in time is a bit dangerous for us.

“It’s not a matter of not having it for performance, but we need to fine-tune it to be able to use it without any issues.”

Did a ‘useless’ Friday reveal the mindset of a MotoGP title contender?