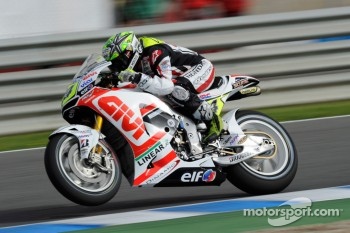 The LCR Honda MotoGP rider Toni Elias got a positive 11th place in today’s 28-lap Grand Prix of Portugal at Estoril race track despite some rear grip issues due to the mixed conditions of the Portuguese asphalt. The third round of the season got underway at 13:00 local time and was held in dry conditions although cloudy skies have welcomed the riders and Teams this morning.

After yesterday’s issues which prevented Elias from taking a better spot on todays’ grid, the Spaniard riding the RCV took a good start from the 17th position aiming to stay up in the pack but he struggled because the relatively low track temperatures prevented him from generating enough heat in the rear tyre. However Elias manages to finish 11th obtaining 5 points in the standing and will be back on track tomorrow for an additional day of testing.

Elias 11th : “Well... it has been a difficult and hard race for me. In the beginning I have struggled a lot because the bike was pushing a lot in the front in the braking points but then Capirossi and Randy have slowed down and I could catch them. I have beat Loris and could have passed Randy with 2 further laps as my pace was consistent. I am not satisfied about my position but I am pleased with my performance because I pushed hard till the end. In my opinion we have got a big potential and we took a step forward on Friday so in tomorrow’s test we must develop the data we have gathered to improve the bike”.

Elias to see out MotoGP season with Forward