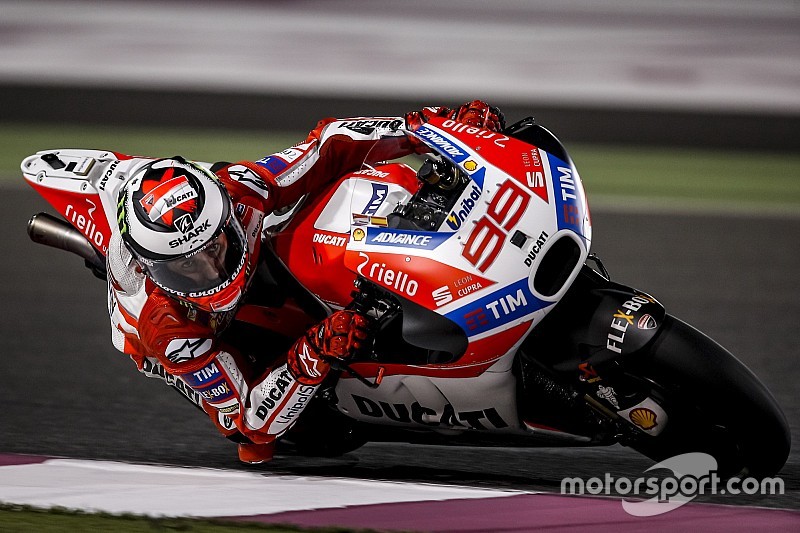 Jorge Lorenzo admits that challenging for victory in the MotoGP season-opener in Qatar will be “very difficult” following the penultimate day of pre-season testing.

The Ducati rider has endured a tough start to 2017, and while he has made considerable progress since a dismal opening day of testing in Sepang in January, he has still been a way off the pace during two days of testing at Losail so far.

On Saturday, he ended up eighth-fastest, 0.889s slower than his replacement at Yamaha for the new campaign, Maverick Vinales.

Having previously been tipped to fight for the win in Qatar, historically a happy hunting ground for Ducati, Lorenzo played down his prospects when asked about his chances of victory on Saturday.

“For the moment, I think it’s difficult for me and the bike to win here,” the Spaniard admitted. “Tomorrow [Sunday] I will tell you, but right now I see it [being] very difficult.

“But you never know what can happen. It depends on the conditions and a lot of things. The tyres will be important for us.”

Lorenzo, who didn’t try the radical new aerodynamic fairing seen on teammate Andrea Dovizioso’s bike, was one of few riders not to complete a late run on soft tyres on Saturday.

This, combined with the high humidity at the Losail track that he claims penalised all the Ducati riders, is what was responsible for the deficit to the frontrunners, the three-time champion believes.

“Unfortunately with the same tyres, with very high humidity and a very cold track, all the Ducatis struggled more than the other brands,” said Lorenzo.

“[It was] just when they put new tyres mostly, with Marc [Marquez] I was the only one who didn’t use the new tyre, they made big improvements so they overtook me in the classification.