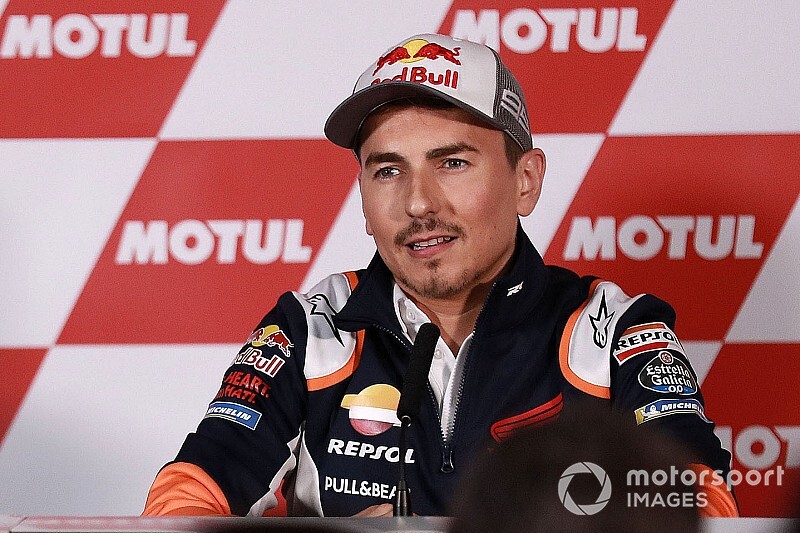 Three-time MotoGP world champion Jorge Lorenzo has called time on his glittering career at the end of his worst season in grand prix racing.

Lorenzo joined Honda for 2019, but a season plagued by injury and difficulties in adapting to the RC213V meant he hasn't even scored a top-10 finish ahead of the season finale in Valencia.

After ultimately committing to Honda for next year after making contact with Ducati about a potential return, Lorenzo’s form continued to spiral and this led to rumours he would retire at the end of this season.

"This will be my last race in MotoGP and at the end of the race I will retire as a professional racer."

On Thursday at Valencia, Dorna called an exceptional press conference for the Honda rider, where Lorenzo confirmed this weekend's race would be his last as a MotoGP rider.

"And then [there's] the day you retire. As you all imagine here, I'm here to announce that this day has arrived for me. This will be my last race in MotoGP and at the end of the race I will retire as a professional racer."

Lorenzo made his grand prix debut in the 125cc class when he was just 15 in 2002, and took his maiden win the following year in Brazil.

He added to his tally of victories with three on the way to fourth in the standings, before stepping up to the 250cc class in ’05.

Though he managed six podiums, Lorenzo’s often wild temperament led to him being banned from that year’s Malaysian GP.

Lorenzo won back-to-back 250cc crowns in ’06 and ’07 before stepping up to MotoGP in ’08 with Yamaha, which was a deal signed two years prior.

Taking pole for his debut in Qatar, Lorenzo took his first win in Portugal in a season interrupted by numerous injury problems.

He challenged teammate Valentino Rossi for the title in ’09, with the pairs rivalry grabbing headlines as Lorenzo looked to upset the established order.

He locked horns with Rossi again in ’10, but was a broken leg for the Italian early season gave Lorenzo a prime opportunity to seal his first MotoGP crown, which he did with a race to spare in Malaysia.

He would beat Dani Pedrosa to the ’12 MotoGP title, and engaged in a season-long battle with Rossi again in ’15 to wrap up his third MotoGP championship – making him the only rider to have dethroned Marquez since the reigning champion joined the class in ’13.

Lorenzo would move to Ducati for ’17 after nine years at Yamaha, and though he struggled to adapt to the Desmosedici in that first year, he went onto win three races in ’18 and likely would have added to that had it not been for a late-season wrist injury.

Lorenzo: From unsettling Rossi to back of the grid ignominy

NASCAR starts racing again: When is it, where, how to watch