Jorge Lorenzo says he has to "accept" his current limitations aboard Honda's MotoGP bike after missing his self-imposed target in Sunday's Aragon Grand Prix by some way.

Having finished 47 seconds down on teammate Marc Marquez at Misano, Lorenzo had hoped to be within 30s of the winner at Aragon, his third race back from injury.

But after qualifying down in 20th, Lorenzo finished in the same position - his lowest of the season - 46s behind a dominant Marquez on the sister Repsol machine.

The three-time premier class champion admitted on Friday his lack of speed was not primarily a result of his physical condition, although he said post-race he is still being held back by a fear of crashing and worsening his injuries.

"As you know I tried my best, doesn’t matter if I am leading the race or if I’m in 20th position – I always try my best," said Lorenzo.

"If my best is to fight for the win I win, and if my best is to get the result I’m getting I need to accept the situation and finish the race. There is no other choice.

"I think apart from the rest, which is not good obviously, and 46 seconds are a lot, I think we did go away from here with some positive things. I think some practice and even in the middle of the race I could ride a little bit with more flow, more like at the beginning of the season.

“But obviously the injury affect a lot my physical condition and my pain when I’m riding, and I lose a little bit from that."

Lorenzo also blamed his poor race pace on a fading rear tyre, something he feels is exaggerated by the set-up is he using to give himself the front feeling he needs on the Honda.

But he expressed some optimism that he could yet find a solution to this particular issue in the remaining five races of the season.

"Obviously I felt a lot the drop in the rear tyre, was very big," Lorenzo recalled. "Looks like the traction of the rear tyres, you have a standard setting you then generate no grip on the rear, especially for the race, and you the rear just doesn’t bite the asphalt to drive.

"So I am all the race trying to manage this spinning, trying to save tyre and even like this I was dropping and we just need to work on that, try to find some solutions.

"It’s true that when I try to be a bit closer to the settings Marc and Cal [Crutchlow] are using, I get worse front confidence. That’s why I always sacrifice a bit on the rear to find a bit on the front.

"Maybe we need to find a solution to gain rear grip to be able to not suffer too much in the race without losing stability. [If] we find that, we can be more competitive, I believe, for the rest of the season." 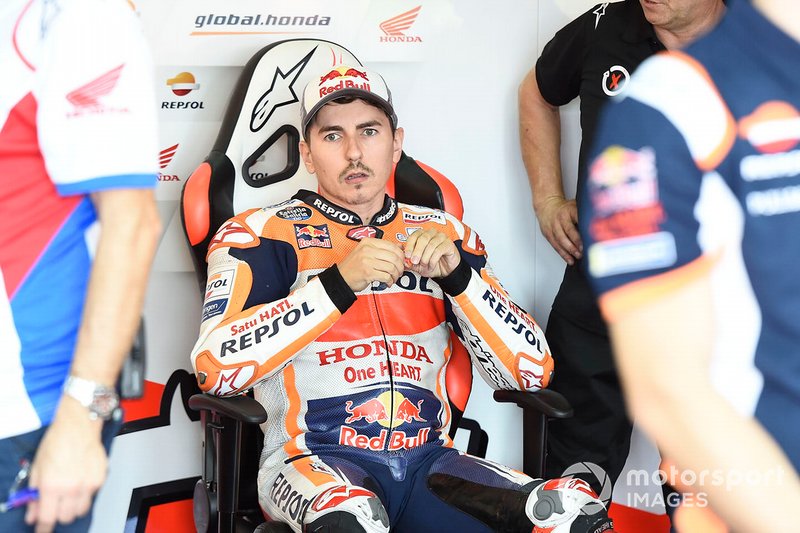