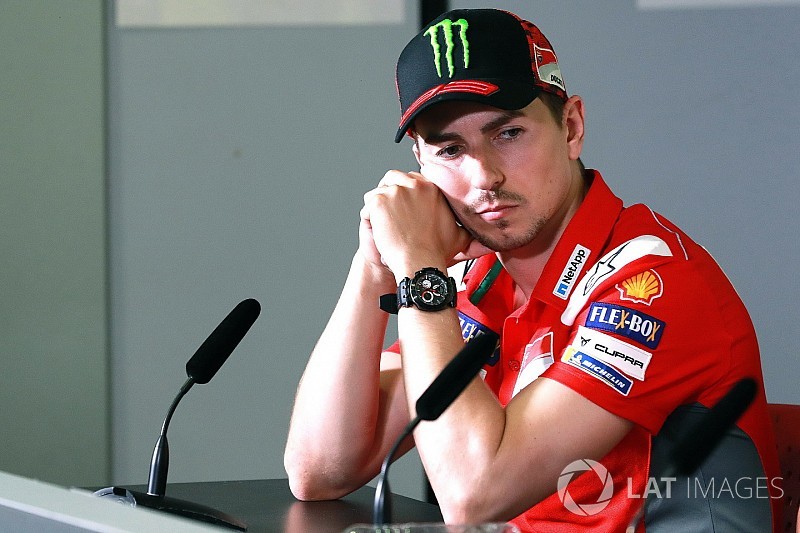 Jorge Lorenzo's bid to get back into the 2018 MotoGP title fight will be hampered by his “bad days” being worse than those of his rivals, according to Cal Crutchlow.

Lorenzo has made a recent breakthrough with his Ducati Desmosedici GP18 bike, winning back-to-back races at Mugello and Barcelona.

While he remains some 49 points behind championship leader Marc Marquez, both Lorenzo himself and several of his rivals have insisted he could still feature in the title battle.

Crutchlow too conceded Lorenzo is not yet out of contention, but reckoned the two upcoming venues – Assen and Sachsenring, which have yielded no better than a pair of third-place finishes for Lorenzo since 2012 – could see his championship standing take a hit once more.

“I think he's riding the Ducati very well, but the Ducati, in one way, seems a lot like the Yamaha now anyway, for the corner speed, for the way that the bike can turn,” Crutchlow said.

“So, he's found the rhythm of being able to be in that consistent zone that he can always go in. And once he finds that, you're always in trouble.

“But I think places like Assen and Sachsenring, he will struggle a lot more than somewhere that he loves, like Mugello and like here [in Barcelona].

“Honestly, he could be 10th. And he's not going to be like Marc or like Dovi [Andrea Dovizioso], that's going to be third or fourth on a really bad day - or Valentino [Rossi].

Lorenzo himself mentioned Assen as a question mark for his title resurgence, while Marquez has specifically targeted putting an end to his future teammate's charge at the Dutch venue and the subsequent Sachsenring race.

“Lorenzo is gathering momentum, it's time to stop him as soon as possible,” Marquez told Spanish TV after the Barcelona race.

“These [Mugello and Barcelona] are two very similar circuits, straights and acceleration. We have to stop the streak, at Assen and especially in Germany.”