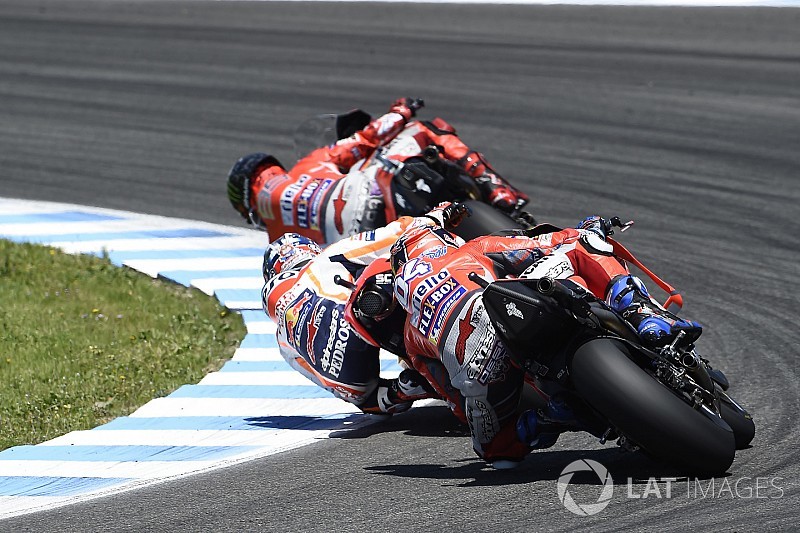 Andrea Dovizioso reckons his teammate Jorge Lorenzo tried to keep him at bay at all costs during MotoGP's Jerez race, which ultimately cost the Italian a chance to fight for the win.

Lorenzo and Dovizioso were running second and third in the middle stages of the race and the duo consistently lost time to leader Marc Marquez, whose lead went from half a second to 2.2s in four laps.

While both Ducati riders failed to finish the race due to a three-bike crash that also involved Dani Pedrosa, Dovizioso said his chance for victory was already over behind Lorenzo.

He said that Lorenzo "didn't want to let me past" and "slowed down to close the door".

When asked if he thought he could catch Marquez late in the race, he said: "No, no, no. At that time was too late. I lost too much behind Jorge.

"That's why we lose the time with Marc because he [Lorenzo] was struggling and he slowed down to close the door.

"And that's why I took 10 laps, I don't know how many laps, to try to overtake him. Because I didn't want to make a mistake.

"If I was behind Marc when he tried to push, maybe I had a chance to follow him. Maybe."

Lorenzo, the only rider in the field to run with soft front tyres, said he was on the limit when Marquez pulled away.

The Ducati rider, who took the lead off the line and was first for eight laps, was "very satisfied" to run so high up despite having "no pace".

"I was very happy because I was really convinced, really determined from the start, I overtook three riders in the first braking point," he said.

"I was braking really hard maybe like ever with this bike maybe even harder than with the Yamaha.

"In that aspect I was very satisfied with my race, very happy because I didn't have the pace but even like that I was leading the race eight laps and going really quick.

"During all the weekend I didn't have the pace, the thing is that I make things that other riders with my pace cannot make in the first laps.

"That is my merit because with no pace I can lead race and another rider can't do that, it's my lucky thing, my talent, let's say, in the last years.